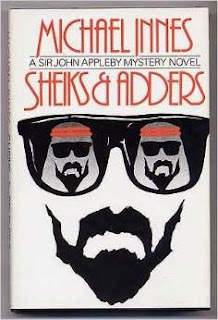 All of Innes' writing is drenched with literary bon-mots, some wittier than others, some more obscure than others. Obviously the author assumes you have had at least two or three years reading English Lit. at Oxford or Cambridge. Still, I love the books and to my surprise, I often do know what Innes is talking about.

Michael Innes, despite (or because of) his literary leanings is, occasionally, given to bouts of story-telling whimsy and the delightful result this time out is SHEIKS AND ADDERS (gotta' LOVE that title!), a froth of a book, moreso because of its relentless fairy tale aspects: imagine Sir John Appleby (retired head of the Metropolitan Police) disguised as Robin Hood and plunked down in the middle of a country fete/masquerade (?) where too many guests are disguised as Arabian sheiks. Imagine that the only reason Appleby is at this fete is because he's overheard a bit of conversation a day or so before and has decided to see what's what. Why? Oh, just because he can.

You know how it goes at these English country fetes - there's ALWAYS a murder. I mean, it's almost de regueur. I don't know about you, but if I lived in England, I'd avoid these annual events like the plague. There's more going on at these seemingly harmless parochial celebrations than just quoits and skittles and 'guess the weight of the cake'.  (You Graham Greene fans will get that one, I hope.)

At Drool Court (the unlikely name of the estate where the fete takes place) Appleby runs across his old friend Tommy Pride, Chief Constable of the area, who has been asked by the foreign office to keep an eye on things. Why? Just in case. In case of what? Pride doesn't know. The foreign office won't reveal details. Being observant, Appleby can't help but notice that Pride is also dressed as Robin Hood. So there you are, two Robin Hoods and a bunch of sheiks wandering around. Confusion to the enemy! Characters in search of a mystery. The fun is just beginning.

Since there is a real sheik mixed in among the phonies, an Emir Hafrait who scorns police protection (it offends his sense of dignity) and wanders about the fete pretty much on his own, can murder be far behind?

When one of the masquerading sheiks is found with an arrow through his back, the real sheik finally realizes that his enemies mean business. Not wanting to cause a panic, the two representatives (and a few local bobbies) of the law must investigate the case without alerting the crowd to the fact that there is a murderer loose among them.

Despite the well-intentioned obstruction of the quirky (is there any other kind?) family that owns Drool Court, Appleby and Pride will navigate through an entanglement of characters - among them a sinister bunch of chanting Druids hired to perform an ancient rite, a Herpetologist whose collection of snakes must come in handy (well, you knew there had to be snakes somewhere in the plot), a troop of boisterous boy scouts, a drunken hot air balloonist, and a lovely young heroine whose thwarted love life must be straightened out in time for a happy ending.

Though this Appleby has mostly negative reviews online, I loved it. I love what Appleby is doing here and I suppose that means that I can tolerate whimsy more than most. This is a fun book not really meant to be taken seriously, so if you want to quibble about the nonesensical plot, coincidences that stretch believability and other random incredulities, than just don't read it.

The NY Times original review. Obviously they do not like their mysteries loaded with wit and whimsy. This review has a lovely sneering quality to it that made me laugh. Hence its inclusion in my post.

This post is part of the Friday Forgotten Books meme hosted by Patti Abbott at her blog, Pattinase. A meme in which I only occasionally take part because I'm old and doddering and busy with the realities of day-to-day life, some pleasant, some not so.

Link to Michael Innes Fantastic Fiction page which lists all his books.
Posted by Yvette at 4:36 PM