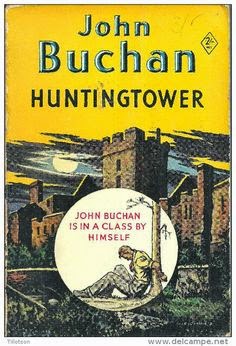 It's very early days yet, but any book I read from now on will have to go a mighty long way to thrill and enchant me in quite the same way as John Buchan's HUNTINGTOWER has. What a marvel of a book!

John Buchan: What a man. What an amazing life. What a writer. HUNTINGTOWER is just the perfect sort of book for a cold and snowy winter day.

I've already read Buchan's THE THIRTY NINE STEPS and know the film well of course, and I'm also reading GREENMANTLE. I also have MR. STANDFAST lined up as well - all three titles are Richard Hannay books. (I've since read and rejoiced in GREENMANTLE and MR. STANDFAST and recommend them as well. Though neither were quite as wonderful as HUNTINGTOWER.)

I happened upon a very nice paperback edition and read it through in two nights. This is a Buchan 'romance' in the great tradition of romantic adventures so favored by writers such as Robert Louis Stevenson or Sir Walter Scott though it takes place in the 'modern day' of 1922 or so. But it is also a tale with a dark undertow of unregenerate villainy, outreach of the revolutionary scourge rampant in Russia in the early part of the 20th century.

Our hero is Dickson McCunn, a nice, middle-aged Scottish grocer who has sold his very successful Glasgow emporium (and its two branch stores) to a big chain and is able thereon, to lead a life of leisure.

Dickson yearns for adventure and the romance of the open road. He has a couple of weeks to himself as his wife has gone off to her favorite spa where she '...put on her afternoon dress and every jewel she possessed when she rose in the morning, ate large meals of which the novelty atoned for the nastiness, and collected an immense casual acquaintance, with whom she discussed ailments, ministers, sudden deaths, and the intricate genealogies of her class.'  None of which interest Dickson in the least.

No, he is off on a walking tour of the Scottish highlands - looking for adventure and whatever comes his way. Though cognizant of the fact that, at his age, he really and truly would not know how to deal with 'Adventure' if it did come his way in large doses, Dickson still yearns for, maybe, a small sort of adventure, something appropriate to his nature and stature. To that end he perforce comforts himself with idyllic thoughts, romantic poetry and moody scenery - languid stops amid the heather and the bracken and the crisp beauty of the Scottish hills stir the longing of his soul.

Not to mention frequent stops at accommodating inns along the way:

Now the Black Bull at Kirkmichael is one of the few very good inns left in the world. It is an old place and an hospitable, for it has been for generations a haunt of anglers, who above all other men understand comfort. There are always bright fires there, and hot water, and old soft leather armchairs, and an aroma of good food and good tobacco, and giant trout in glass cases, and pictures of Captain Barclay of Urie walking to London, and Mr. Ramsay of Barnton winning a horse-race, and the three-volume edition of the Waverley Novels with many volumes missing, and indeed all those things which an inn should have. Also there used to be - there may still be - sound vintage claret in the cellars. The Black Bull expects its guests to arrive in every stage of dishevelment, and Dickson was received by a cordial landlord, who offered dry garments as a matter of course...(Dickson having been caught in an exhilarating downpour while perambulating the countryside.)

At the Black Bull the would-be adventurer first meets John Heritage, ex-soldier, erstwhile poet, admirer of the struggling proletariat, absorbed in a book of poetry. A glance convinced Dickson that the work was French, a literature which did not interest him. He knew little of the tongue and suspected it of impropriety.

Presently, and almost quicker than Dickson, perhaps, would have liked, Adventure with a Capital A, descends on him: a beautiful Russian princess in the immediate neighborhood needs saving. She is being held prisoner in a place called Huntingtower, an isolated, abandoned and decrepit manor perched on a cliff overlooking the sea. A princess in a tower. Yes.

But really, is it any of his business? muses Dickson. After all, it may be a hoax. Things like this don't happen in reality. And anyway, he's much too old to be involved in anything this hare-brained.

So, what if John Heritage thinks he has recognized a voice singing in the night? Heritage is younger and stronger - if he fancies himself a knight-errant, so be it.  - let him go off on a wild goose chase. He, Dickson, will continue on his walking tour.

Well, of course, he doesn't, he can't. His own self-esteem will not let him desert a fellow-being in trouble.

What happens next is as thrilling an adventure as anything Dickson could have invented for himself, an adventure which will test him to the very marrow of his being. In addition, he will be introduced to several wonderful - even life altering - characters.

Not only John Heritage, who, after making a bad first impression, turns out to be as stalwart and loyal a friend and hero as anyone could hope to meet, but also, very unexpectedly, young Dougal and his barefoot, skinny and bedraggled band of steadfast Glaswegian 'boy scouts'  (aka the Gorbals Die-Hards) without whose help, the Princess would have surely perished. Then there's the elderly and very canny Scottish villager, Mrs. Moran, whose indefatigable spirit, gumption and notions of right and wrong will, at one perilous point, help save the day.

As for the villains, there are many - even a hunchback with a limp! Thugs, mindless minions, and an evil master criminal who will stop at nothing and arrives at just the right point in the narrative, eager to do his vile worst - exactly the sort of villainy we yearn for - at least in books.

In the meantime, Dickson McCunn has undergone an evolution: the grocer has discovered in himself a man of action, a man who can be counted on, someone who may be relied upon not to quit when the going gets rough. The adventure he craves, arrives and finds him ready and able to heed its call - after an initial bout of disbelief and self-doubt, which I'd add, is only prudent.

John Heritage too has made a discovery - his cynicism has taken a beating - he has found that, despite his early protestations, his soul does, indeed, crave romance. Heritage goes so far as to quote Tennyson (a poet he'd sneered at) quite willingly, finding that, after all, the Victorian Poet Laureate did have relevance.


'And on her lover's arm she leant,
And round her waist she felt it fold,
And far across the hills they went
In that new world which is the old:
Across the hills, and far away
Beyond their utmost purple rim,
And deep into the dying day
The happy princess followed him'

He repeats the last two lines twice and draws in a deep breath. 'How right!' he cries. 'How absolutely right! Lord! It's astonishing how that old bird Tennyson got the goods!'

What an absolute delight of a tale. I'm in love with the whole idea of the hesitant, middle-aged, secretly romantic English male enjoying scenery, reading poetry and stumbling over an amazing adventure.  I also love the idea of an odd bunch of willing help-mates who will fight to the death - if need be - to save the princess in peril. Honor's the thing here. I love that too - old fashioned notion as it may be. Such a wonderfully developed and dramatically exploited tale. I can't wait to read it again.

Found my copy at Abe Books for very little money.

Lots of love going on in this review, but I simply couldn't help myself.