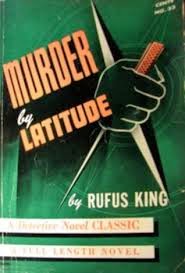 This book by an author foolishly forgotten has everything you'd want in a mystery and then some. I began reading - not really knowing what to expect - and didn't/couldn't stop until I was over half way through and the only reason I did finally stop was that is was four in the morning. I am now proposing we start a Rufus King Fan Club - with myself as president.

Rufus King (1893 - 1966) was an American mystery writer born in NYC and already seven years old at the dawn of the exciting twentieth century with its influx of new-fangled inventions sprouting right and left and two World Wars on the horizon. He lived long enough to see the advent of most of what we take for granted today. In his time, King was as famous and sought after a writer of whodunits as Ellery Queen and the rest of the American Golden Agers. But have you ever heard of him? Probably not. I had only vaguely done so and have just recently read this one book of his - the others being a bit pricey online.

First a bit of bio from Mike Grost at gadetection:

He [King] was educated at Yale, joined the army in 1916 and later went to sea as a wireless operator. During the 1920's he originated the upper-crust detective Reginald De Puyster in a series of magazine stories. A more famous character, Lieutenant Valcour, appeared in his first novel, MURDER BY THE CLOCK (1929). A further series centered on Stuff Driscoll, a criminologist in a sheriff's office. He [King] also wrote humorous plays with detective themes.

MURDER BY LATITUDE (1930) is one of several sea-faring whodunits written by King and features his laconic NYC cop, Lieutenant Valcour. This time out, Valcour is on board the Eastern Bay's scheduled voyage from Bermuda to Halifax, on the trail of a murderer whom he suspects is on board. Well, you know, this sort of mystery - murder on board ship - is like manna from heaven for me. I fairly leaped into the book. Don't you love when that happens?

The plot:  A chap named Gant, the ship's wireless operator (and incidentally, the ONLY crew member on board who knows how to use the necessary contraption), is ruthlessly murdered after receiving an important message - from NYC police headquarters - which would have given Lieutenant Valcour an eye witness description of a killer. Since of course the killer has destroyed the initial message, Valcour is in a quandary, with several suspects among the passengers and even, perhaps, the crew.

Among the passengers is the enigmatic Mrs. Poole, an older woman in stubborn defiance of her true age, honeymooning with a new and sexy young hubby (her fourth or fifth) whom she's picked up on a Bermuda beach. Though in reality she is only as young as surgery and make-up can make her, she is rolling in dough and, as we know, good looking young men without inclination to earn a living, must have means.

As Valcour surmises, the mystery centers around Mrs. Poole and her convoluted family history. In New York, the initial murder victim was Poole's first husband, an event which does not seem to upset the lady over much.

The other passengers on board the Eastern Bay - an eccentric bunch - are several young men of various attitudes and looks, a couple of spinster sisters, an elderly husband and wife, and a guy who wears high heels. Now I don't know about you, but high heels on a man - even a man obviously meant to be gay, seems a bit much. I can't remember when high heels were ever worn with men's clothing (by men, that is) even way back when. But I'm assuming the author means men's shoes with a raised heel? Not, I assume, women's pumps. I was never sure. But anyway, it's only a minor point. And the guy who wears 'em makes no apology for this idiosyncrasy, so it's soon forgotten and/or accepted as the killer strikes yet again.

Note: At one point in the book, Valcour must decide if the murderer is a woman masquerading as a man or a man masquerading as a woman. Hint: Mrs. Poole had an 'adopted daughter' who she'd tired of and given away when the child was nine years old, never to be seen or contacted again except through yearly drafts from lawyers.

Sexual identity is the unusual main theme of MURDER BY LATITUDE and Rufus King handles this very well. He makes no secret of the fact that Gant, the radio operator, had a close pal among the crew, a pal who is grieving and hoping for revenge. With his help and that of the Eastern Bay's voluble captain, Valcour will use his wiles to ferret out a canny killer who seems always to have luck on his side.

I am duly smitten with Rufus King and Lieutenant Valcour and hope I've convinced you to try this book which is one of the easiest to find online for hardly much money at all. Abe Books is currently my 'go-to' for 'cheap' vintage and I always think if I can't find it there at reasonable cost, it probably doesn't exist. I'm not talking about collectible copies, of course - just decent readable ones.

And for another look at MURDER BY LATITUDE, from another Rufus King admirer, check out The Passing Tramp's earlier review.