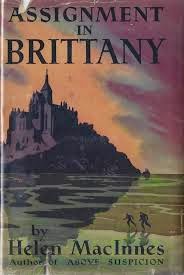 ASSIGNMENT IN BRITTANY (1942) is not only the author's second book, it also happens to be my second favorite - after ABOVE SUSPICION which was Helen MacInnes' impressive debut. I'm hoping to track down her other books which, far as I'm concerned, should still be readily available but apparently are not. (I read most of them while in my teens.) MacInnes wrote some terrific low-key thrillers which certainly should not be out of print. She didn't have the noirish capabilities and gift of ambiguous characterization of Eric Ambler, but armed with a keen knack for atmosphere and setting, MacInnes spun her own suspenseful spy thrillers peopled with an attractive assortment of intriguing characters, some of which one wouldn't mind knowing.

Reading ASSIGNMENT IN BRITTANY late into the night, I was completely taken up by this dark tale of WWII intrigue, betrayal and heroism. The good guys are good, the bad guys are vile Nazis - easy to despise. What more could you want? I love this sort of thing when it's done well.

The book's aura and attitude are of a particular moment since the book was written in 1940 and published in 1942. The tale pertains to the behind the scenes activities of a British spy in France as that country is overtaken by the Nazi scourge.

Our hero, Martin Hearne, is a smart, savvy, stalwart Brit; an experienced intelligence agent who speaks French and German fluently, not to mention the language spoken in Brittany which is, I'm given to understand, totally different from regular French. Hearne is resilient and quick to seize opportunity, traits which have made him successful at his trade. Unlikely happenstance has it that he is the spitting image of a certain Bertrand Corlay, a swarthy rugged type who has washed up in England in the tumult of Dunkirk (1940) and is now in hospital where his likeness to a certain British agent has been duly noted.

Hearne then is recruited to step into Corlay's life with the seeming cooperation of the patient who is urged to spill all particulars so that Hearne may successfully impersonate and insinuate himself into a Brittany landscape full of suspicious Bretons and sinister Germans. His task is to make note of the movements of the Germans who, it turns out, are stealthily building air fields and moving munitions into the northern French countryside, cleverly using the Bretons' own jingoistic prejudices and xenophobia against them.

Properly coached and carrying the necessary papers, Hearne is parachuted behind enemy lines and into the desolate outskirts of the isolated village of St. Deodat. At Corlay's farm, Hearns is mystified at first when Corlay's elderly mother treats him with suspicion and dislike. He is also taken aback when Corlay's fiancee Anne, a lovely young woman, breaks 'their' long-term engagement. Complications further arise when Corlay's seductive mistress Elise, a Nazi collaborator, makes her appearance. Obviously Corlay had a secret life which he'd failed to reveal to Hearne and his handlers.

Fulfilling his mission, working with a rudimentary Resistance, allaying the Bretons' suspicions while trying to stay a step ahead of the Gestapo as he unwittingly falls in love with Corlay's ex-fiancee, Anne, professional spy Martin Hearne aka Bertrand Corlay must, in the end, trust his fate to a local school teacher and the village priest, the unlikeliest of heroes.

ASSIGNMENT IN BRITTANY is the sort of book you can't put down and want to read in one gulp. If you can find a copy (I got mine at the library - wonder of wonders), set an evening or two aside and lose yourself in this terrific tale of courage and WWII espionage.

Since it's Friday, don't forget to check in at Patti Abbott's blog, Pattinase, to see what other Forgotten or Overlooked Books other bloggers are talking about today.
Posted by Yvette at 9:30 AM