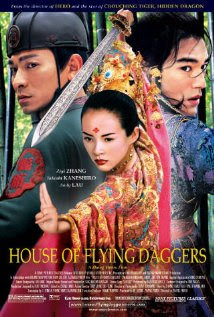 This is a film which, from beginning to end, is like an unraveling of a dangerous but beautiful visual poem. It is a feast for the eyes and yet, in one spectacular scene near the end, pulls in all the emotions it has toyed with for most of the film and delivers a heart-stopping pay-off with dialogue rather than visuals. (Though we are staggered as well by the incredible duel of knife and sword which has taken place in the snow.)

HOUSE OF FLYING DAGGERS (2004) is a martial arts film from China, directed by Yimou Zhang, written by Feng Li, Bing Wan and Yimou Zhang, and starring Ziyi Zhang, Andy Lao and Takeshi Kaneshiro. The brilliant cinematography is by Xiaoding Zhao. Check out the entire technical crew over at the film's imdb page. It lists an almost overwhelmingly hefty group of artists and technicians involved in bringing this ravishing fable to the screen.

The movie is like nothing you've ever seen. (By the way, I liked it much, much better than Crouching Tiger, etc.) Though there are lots of lightning quick computer nips and literal flights (by the actors) of fancy, in this case, the digital manipulation only adds to the magic. It doesn't jar, and it doesn't take away or disrupt as is so often the case.

Manipulation is also used in heightening the intensity of the colors - something I've learned is a hallmark of this particular director. There are technical terms which describe this school of movie-making featuring fantastical martial arts scenes, but I'm not a technical person and really, if you want to learn more about this sort of thing, the Internet is your oyster. 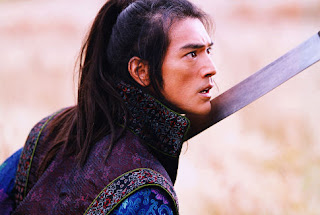 In an odd way, I'm convinced this film is meant to dazzle the eye in the same way that the onslaught of fabulous studio Technicolor productions were first meant to take us up and away out of ourselves in the late 40's and early 50's when color and movie razzmatazz were new things. Not sure if I'm making myself clear, but the idea intrigues me.

Whether you know anything about Chinese movies or not (I don't), I believe HOUSE OF FLYING DAGGERS is a film for the ages based purely on its beauty. The actors and costumes are gorgeous, the setting is almost too beautiful to comprehend with the human eye and the camera work and stunts dazzle as they upend your sense of reality. Things happen in this movie that defy visual logic, but the way of it is such - at the hands of a genius director - that you  immediately cease to resist. You throw logic out the window. 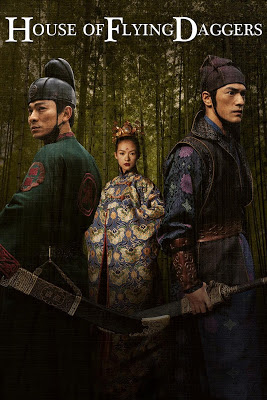 All of this splendor almost serves to hide the weakness of the nonsensical story. In truth, the screenplay has so many holes in it that if you try to dissect the thing rationally you will only wind up befuddled and bemused, asking yourself: 'Well, why didn't he do this? Why didn't she do that? Why didn't they do this? Why? Why? Why?'

It's best not to pay too close attention to plot-points, and just sit back and let this glorious film wash over you like a waking dream.

Having said that, I'll give you the basic plot which, as I said, only pays off emotionally near the end with one final burst of beautiful, heart-breaking dialogue. This particular film is more love story than mere martial arts tomfoolery  - not that there's anything wrong with that. 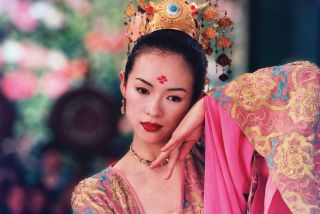 The film is set in 859 A.D. (I only know this because the Wikipedia page tells me so.) The exquisitely beautiful  Ziyi Zhang,  plays Xiao Mei, a blind dancer who is suspected of being part of a revolutionary cult - the House of Flying Daggers. She is the daughter of the old leader. 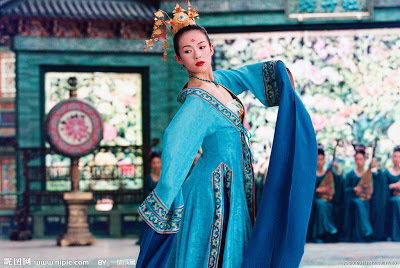 Before being lugged off to prison, Xiao Mei must, of course, dance.

Though the old leader has been killed, the Flying Daggers have not been destroyed. They are led now by a new mysterious leader. The government is eager to be rid of him and his followers. Xiao Mei is arrested and thrown in prison. 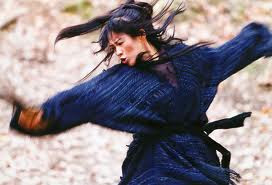 Two local police captains, Jin (Takeshi Kaneshiro) and Liu (Andy Lao) are charged with killing the new leader. To that end, they plot to break Xiao Mei out of prison and allow her to lead them back to the revolutionary lair deep in the forest. Jin (using a different name) will trick Xiao Mei into thinking he is in cahoots with  her - thus he will escort her back to her revolutionary friends. 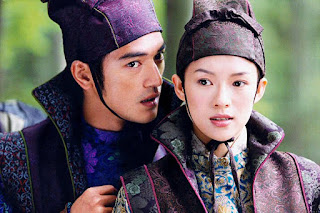 Most of the movie is made up of the journey of Jin and Xiao (Jin gains her trust and they grow close) followed out of sight by Liu.

There are several dangerous encounters with brigands and such along the way, and Jin and Xiao come to rely on each other as they fight for their lives. There is one extraordinary scene set in a bamboo forest which will take your breath away. The technical artistry of it all boggles the mind.

Once they reach the revolutionary hiding place, there are double-crosses to be dealt with, pretenses to be unraveled but the eternal question of 'why?' never really does get answered. 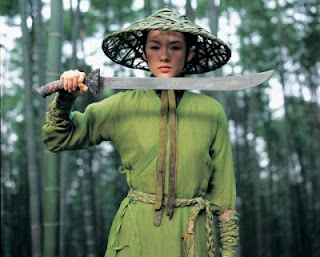 I can say no more without giving away essential mysteries.

If you love the glory of film and the idea of being taken completely out of yourself, then don't miss THE HOUSE OF FLYING DAGGERS. I promise you it's like nothing you've ever seen. 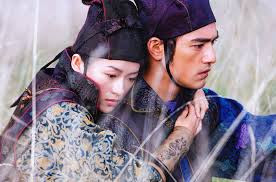 You can watch the film free on youtube at this link.

Also don't forget to check in at Overlooked (or Forgotten) Films Central (Todd's Blog) and see what other films and/or other visuals, other bloggers are talking about today.
Posted by Yvette at 2:53 PM