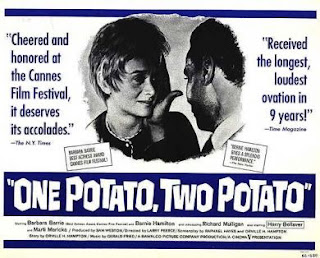 Tuesday's Overlooked Films is a weekly meme hosted by Todd Mason at his blog, SWEET FREEDOM. Don't forget to check in later and see what overlooked or forgotten films other bloggers are talking about today. Link.

A big film can have little or no impact beyond the moment. AVATAR was the biggest, glossiest film I've seen in ages - so BIG, in fact, that we felt we needed to see it in the theater even if encumbered by those annoying 3-D glasses. Glasses over glasses in my case.

The film itself was a lot of bright and splashy fun but once I left the theater, I left the film behind. Or I should say, the film left me.

Then there are the little films that stay with you for years - that never quite leave you. Films like, 1964's ONE POTATO, TWO POTATO starring Barbara Barrie and Bernie Hamilton.

For those of you - most of you - who haven't seen ONE POTATO, TWO POTATO, I do recommend this film for daring to handle a very difficult subject (at the time) and for the wonderful acting. Even to have filmed this story back then was a huge accomplishment. But to have made it so real, so 'in the moment' makes something truly special of this heartbreaking story..

ONE POTATO, TWO POTATO (I'm still not sure why this title), directed by Larry Peerce and written by Orville Hampton and Raphael Hayes, is a small, unsentimental film - 83 minutes long -done very much on a shoestring budget. It was filmed on location in and around Painesville, Ohio. (An ironic name if there ever was one.) I remember the starkness of the black and white camerawork, the bleak, un-romantic tone and sense of place. A perfect background for a quietly intense story of love and anguish.

The film made me feel like a voyeur watching something fragile and real. Occasionally I got the feeling we were not supposed to be watching at all. The first half of the film seems a very private thing.

Barbara Barrie  has such a wonderfully gentle screen presence as Julie Cullen, a white woman who has been abandoned by her feckless husband Joe, played by Richard Mulligan. After the divorce, Julie faces a bleak future as a single parent. She struggles to raise their daughter, Ellen, in the small Midwestern town they've recently moved to. When she finds a job at a local plant, Julie meets Frank Richards (Bernie Hamilton) an African American man who works in the office. 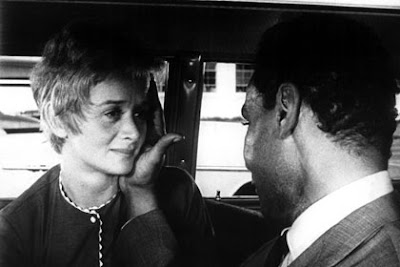 Frank is everything Joe was not; responsible, kind, gentle, and caring. Slowly Julie and Frank fall in love and decide, against all odds, to marry. 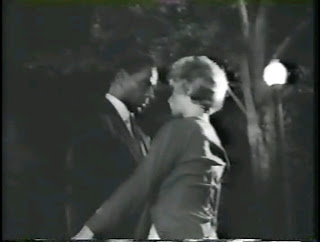 The courtship is handled nicely by the film makers never forgetting that these are not two racial pioneers wanting to make a 'statement' but just two ordinary people who have fallen in love.

Frank's father is not happy with the situation, though his mother welcomes Julie. 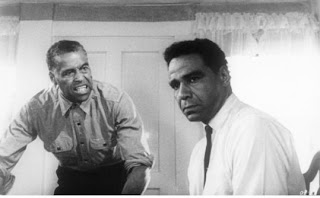 After the wedding, Julie, her daughter Ellen and Frank, move to Frank's parents' farm where, in time, Julie and Frank have a son and Frank's father comes around.

But then, out of the blue, Joe Cullen, Julie's ex, reappears on the scene. (Back from South America where he'd gone to 'find his fortune'.) When he finds out that Julie is married to a black man, he decides to sue for his daughter's custody. An interracial family is no place for Ellen, he claims. Though the child is happy living on the farm with Julie and Frank, her new brother and Frank's parents.

It is the total disregard of his daughter's security and happiness by Joe Cullen, that makes this second half of the film so difficult to watch. He is vindictive, selfish and prejudiced but he represents the view of the majority in the early sixties where interracial marriage or even, dating, was looked upon with distaste and disapproval - in some states, it was illegal for blacks and whites to marry.

The judge presiding over the case can see for himself that Julie's daughter Ellen is a well adjusted and happy child, but he feels he must take into account, the dim view of society when deciding the outcome of the custody trial.

The court claims to want what's best for Ellen.