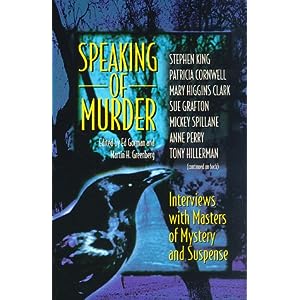 If it's Friday, it's Forgotten Book Day, the weekly meme hosted by Patti Abbott at her blog, PATTINASE  Don't forget to check in and see what forgotten books other bloggers are reminding us of today.

My entry is, SPEAKING OF MURDER Interviews with Masters of Mystery and Suspense - edited by Ed Gorman and Martin H. Greenberg - published in 1998 by Berkeley Prime Crime. With a forward by mystery author Ed Gorman.

Each chapter of SPEAKING OF MURDER is done up simply in question and answer form. There are 21 suspense novelists whose answers are as varied and intriguing as their books.

SK: Stephen King is a family guy, a grounded individual whose morals are recognizable as roughly the same as the morals of most of the people who read his books. They are fairly well grounded in terms of sanity and morals. Which is good, because a lot of people read the books. I assume that most of them have their wheels on the road. But Richard Bachman does not have all his wheels on the road. That's just the way it is.

CLPS (Interviewer Charles L.P. Silet): You begin a story with the ending?

MS: Sure I do. Why do you listen to a joke? The biggest part of the joke is the punch line, so the biggest part of the book should be the punch line, the ending. People don't read a book to get to the middle, they read a book to get to the end and hope that the ending justifies all the time they spent reading it. So what I do is, I get my ending and, knowing what my ending is going to be, then I write to the end and have the fun of knowing where I'm going but not how I'm going to get there.

D.J. (Interviewer Dean James): Is there any truth to the rumor that you are the illicit love child of H. Rider Haggard and Dorothy L. Sayers?

EP: Make that illicit grandchild, if you don't mind.