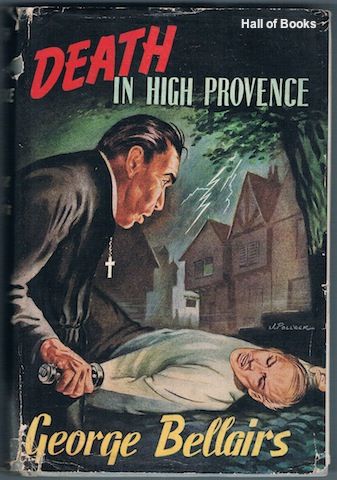 I know, I know, I shouldn't be talking about yet another Bellairs book so soon after having posted about him a couple of weeks ago. But - what the heck - I had to write about DEATH IN HIGH PROVENCE simply because I LOVED it to pieces and didn't want any of you to overlook this gem. Forget everything else, get out your Kindle and buy this book immediately. Yes, I am very high on Bellairs.

All I can say first and foremost is that reading this damn fine mystery felt as if I'd traveled to Provence AND solved a murderous plot all at the same time. George Bellairs can visually create ambience as very few writers can - I've mentioned that before. But here in this particular book, he excels at the visuals. The touch, the feel, the colors, even the smell of Provence is brought to vivid life. I've never been there, but now I almost feel as if I have. Yeah, I'm being fanciful, but bear with me.

Chief Inspector Littlejohn of Scotland Yard and his wife are traveling unofficially in the Provencal region of France at the behest of Spencer Lovell, an English cabinet minister. Lovell is not satisfied with the official results of an investigation into the deadly motor accident which took the lives of his brother Christopher and his wife, Elise. The minister suspects a cover-up by the local French authorities.

I'm gushing, I know, but George Bellairs has the essential knack of being able to pick the reader up and placing him (or her) on the scene. Soon enough we're in the French countryside alongside Littlejohn, sights, sounds and smells all around us. True, Bellairs is wordier at description than Agatha Christie whose knack for setting a scene with very few words none can match - but sometimes you need the words and here they are perfection.

They had driven through Meyrargues and Peyrolles and at the defile of Mirabeau the landscape changed again. There, the waters of the Verdon, joining the Durance, seemed to bring with them a kinder breeze from the uplands of High Provence, which now came in view. There was a faint scent of lavender and thyme on the air, and the planes, oaks and poplars on the roadside gave them welcome shade. They turned right at a by-road for which they had been watching. A new signpost marked the way behind them, Peyrolles; ahead, St. Marcellin, Ginasservis. They climbed gently through the groves of lemons, olives and almonds, and skirted the deep-rooted trees of the Forest of Cadarache.

Another deserted village perched high on the rocks to the left, and then a descent by a steep, winding road. The village of St. Marcellin came upon them suddenly, set in a background of hills, with mountains beyond. Behind, they had left the sun-tortured river valleys with their clear brazen skies; ahead lay the distant peaks, over which hung great clouds like burning walls, the sun lowering in the west illuminating them like the reflection of a vast fire.

Upon arrival in the small and very insular village of St. Marcellin, the Littlejohns are fortunate enough to discover a small but charming inn. There is no running water but the tin bathtub can be hauled up and down the stairs to their room and hot water brought up in various containers by the accommodating landlady and her brooding, pipe smoking hulk of a brother.

Beneath an avenue of plane trees stood a fountain, a tall column of stone rising from a plinth, with four jets emerging from copper pipes and splashing into a large basin set in the earth below. Behind the the fountain were two iron tables with iron chairs and, visible through the trees, an inn. Restaurant Pascal. Marie Alivon. The door stood open and a screen of beads hung in the doorway. Advertisement plaques on either side. Byrrh...Biere D'Alsace...Tabac...A tall, narrow, three storeyed building with a cream washed frontage, green-painted iron balconies on the first floor, drawn green shutters keeping the sun from the upper rooms. To the right of the door on the ground floor, a broad shallow window with a window-box full of red and pink geraniums so strong and thriving that they formed a screen masking the interior.

...Time seemed to stand still in St. Marcellin. The children had dispersed, the streets were empty, and nobody seemed interested in the arrival of strangers....The only other signs of life were the sounds coming from unseen places. Rhythmic blows of a hammer on an anvil in a smithy somewhere, the sound of a flail on a threshing-floor, the hum of a motorcycle on a distant road, the fresh splash of the water-jets at the fountain. The air smelt of stables, hay, and apples stored in lofts.

The church clock struck four on a cracked bell. Nobody about, and yet you felt that, from behind the closed shutters of the houses, you were being watched.

Sure enough, as the Littlejohns settle a bit gingerly into French country coziness, the sinister secrets of the village begin to unravel. And what secrets they are. It is not only the deaths of Christopher Lovell and his wife that are under suspicion, but the death too, before the war, of the last Marquis de St. Marcellin, supposedly a suicide. Everyone in the village is afraid to talk since once they do talk bad things seem to happen. And nobody wants to earn the current Marquis' displeasure. The sinister influence of the current Marquis has everyone in the village under his despotic thumb while he sits, like a spider at the center of a decrepit, crumbling estate, selling off bits and pieces down to the last wine bottle, as the family fortunes slither into nothingness.

The entire sequence of tragic events is eventually sorted out by Littlejohn, but not before an attempted murder, two disappearances and yet another murder as the general wretchedness of a slowly dying village is laid bare. Not a fun place to live, for sure. But at least the food is decent.

"I could give you a nice dinner, too. A well-fed capon, and there are truffles from the plateau of Riez...They are very well-known and are good...And there are mountain strawberries.

...The meal already described by Marie Alivon was waiting for the Littlejohns in the private room/

An appetizing hors d'oeuvre of tomatoes, sardines, fillets of herring, black olives and sausages, served with a tempting flavour oil and garlic. The chicken and the truffles from Riez were cooked to perfection, and followed by mountain strawberries in red wine, with whipped cream in a dish. Then goat's milk cheese, flavoured with thyme, appeared. They drank red wine from a carafe which had been placed there without ordering. A full, kindly wine, whose potency soon made itself felt."

A terrific mystery, great food and a trip to Provence, all without leaving your chair. Can't beat that.

This Friday, Todd is doing hosting duties for author Patricia Abbott's usual Friday roundup at his blog, Sweet Freedom. Don't forget to check in and see what other forgotten or overlooked books other bloggers are talking about today.