Forgotten (or Overlooked) Book: CARDS ON THE TABLE (1936) by Agatha Christie 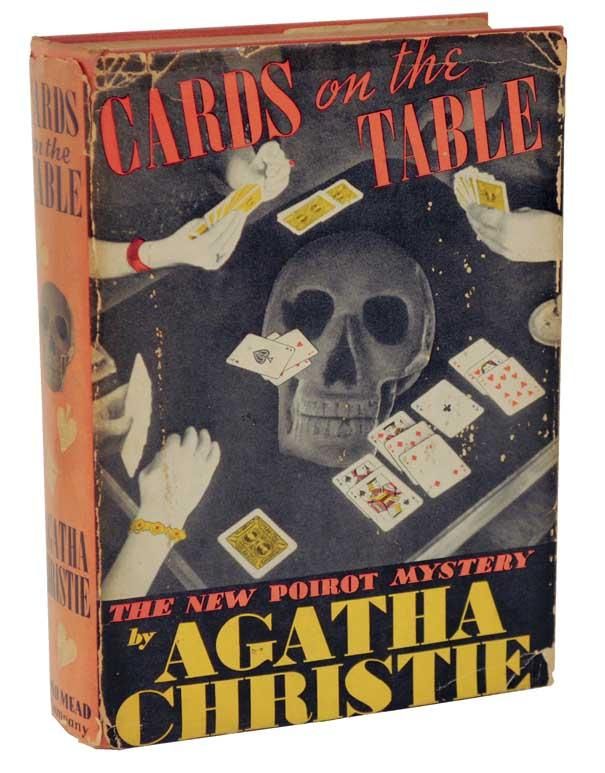 I am currently listening - for the umpteenth time - to CARDS ON THE TABLE narrated by Hugh Fraser (Captain Hastings in the original series with David Suchet as Poirot), and what a wonderful job he does. I am especially fond of his interpretation of both Hercule Poirot and Ariadne Oliver. Listening to the audio version is just another way to enjoy my favorite Christie mysteries while I'm doing other things like cleaning, cooking or whatnot. Good while driving too but I don't drive anymore. I have a rule, though, in general I only listen to books I've already read. Don't ask me to explain, it has something to do with comfort, I expect.

In Christie's early and rather absurdly grandiose book, THE BIG FOUR, the number 4 had much to do with the story (as one would expect) and here, years later, in CARDS ON THE TABLE, the number 4 is front and center once again. Numbers, for Christie, held some importance in several of her books as did nursery rhymes - a recurring motif.

This time though, it's not four evil geniuses of crime, but 4 possible murderers with 4 detectives hot on their trail. (So maybe you might say it was a book in which the number 8 resonates - but let's not be contrary.) This is the book that made me wish I knew how to play bridge. However without knowing beans about it, you can still follow the story quite nicely - it's self explanatory as it turns out.

By the way, this is not one of the great Christie books, but even the lesser Christies are not to be sneezed at. Plus the actual mystery is definitely intriguing as heck, not to mention, the double ending.

Poirot had hinted, in THE ABC MURDERS, that his preferred crime of choice was a quiet domestic murder - say, some people sit down to dinner or a card game and before the evening is out, one of them winds up dead. So here in CARDS ON THE TABLE, Poirot gets his wish.

Poirot and a certain Mr. Shaitana meet casually one day at an exhibition of snuff boxes at Wessex House. The two men make desultory conversation about collecting works of art and thereby springs an idea. Shaitana posits that murder too can be a work of art. He refers to murderers who haven't been caught as the true artists of crime.Uh-oh.

Mr. Shaitana, in appearance, is the sort of man all upright Englishmen desire to kick, so that tells you his type right away. He is a self-important dandy who slithers around town with a superior air, amusing himself at the expense of others. Hard for a guy like that to get on blithely in life without someone eventually showing their resentment.

"The whole of Mr. Shaitana's person caught the eye - it was designed to do so. He deliberately attempted a Mephistophelian effect. He was tall and thin, his face was long and melancholy, his eyebrows were heavily accented and jet black, he wore a moustache with stiff waxed ends and a tiny black imperial. His clothes were works of art - of exquisite cut - but with a suggestion of the bizarre...

...He existed richly and beautifully in a super flat in Park Lane.
He gave wonderful parties - large parties, small parties, macabre parties, respectable parties and definitely 'queer' parties.
He was a man of whom nearly everybody was a little afraid.
Why this last was so can hardly be stated in definite words. There was a feeling, perhaps, that he knew a little too much about everybody. And there was a feeling, too, that his sense of humor was a curious one."

But as Poirot states several times in the book, 'Shaitana was a stupid man.' Poirot's point is that anyone who plays truth or dare with a murderer can't be very clever. Poirot also surmises that you can admire a tiger from afar, but you would not willingly step into a cage with one. Makes sense to me.

But Shaitana disdains middle-class emotions and refuses to see the danger inherent in inviting four murderers to dinner and bridge. Of the four, one is an older, sophisticated woman, one a young, naive woman, one a hale and hearty doctor, and one an adventurer who prefers life in the wild. All, we are given to understand have at some time in their lives committed murder - at least so Shaitana would have us believe. How he knows this we are never really exactly sure. But to add to the fun of the evening, he also invites the one and only Hercule Poirot, Superintendent Battle of Scotland Yard, Colonel Race (secret service) and mystery writer Ariadne Oliver to partake of his vittles.

Before you can say 'we told you so' - Shaitana, sitting quietly before a cozy fire, winds up dead while in the same room, four people play bridge and four others play in an adjoining room. Who did it? Well, obviously a bridge player in the room with the fireplace. But how, without anyone noticing?

We know from the beginning that at least one of the four dinner guests (for we excuse the four detectives as a matter of course) is a murderer, if not all four. Shaitana's ill-advised dinner table conversation drew attention to the subject of unsolved murders thereby putting somebody on guard. Somebody who, by dint of having killed before, is not afraid to strike again.

Superintendent Battle, to be fair, allows Mrs. Oliver (who, after all, is only a mystery writer) to take an unofficial hand in the ensuing investigation since she was in at 'the kill' so to speak. So we have four 'detectives' on the trail of four people, at least one of whom, we definitely know, is a killer.

This is yet another of Christie's character-based murder mysteries. All four suspects are, in a way, archetypes.This very point is made early on as the wheels of the investigation begin to move forward. Poirot, of course, is the first to notice and is able to help his theory along by studying the bridge scores and style of play of each player. He believes that character, in the end, will tell. Hardly anyone, according to Poirot, is capable of acting out of character, especially when it comes to something as dramatic as murder. By studying the characters' bridge game action, he draws some very cogent conclusions.

There are multiple points of view in this story and Christie has the knack of not making the reader resent the shifting back and forth. We learn as much as she wants us to and her sleight of hand, as usual, works a treat. Since all four suspects are apparently murderers, we have to figure out which one panicked or felt threatened enough to murder yet again. And then, of course, there is a further murder as well as an attempted one. Christie even sneaks in a little bit of romance.

All in all, a terrific book, if you accept the premise. My only quibble is that one doesn't really learn just how it is that Shaitana gets his info. To my mind, it's not enough that he was very observant and perhaps, intuitive about people's secrets. Other than that, a good time was had by all. AND we get to see the inside of Aridadne Oliver's flat with its riotous jungle bird wallpaper.

It's Friday, once again so don't forget to check in at author Patricia Abbott's blog, Pattinase, to see what other forgotten or overlooked books other bloggers are talking about today.
Posted by Yvette at 11:25 AM