Friday Forgotten (or Overlooked) Book: MYSTERY OF THE DEAD POLICE (1933) by Philip MacDonald 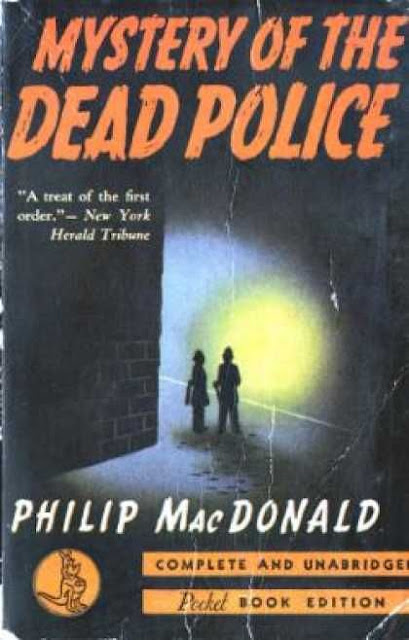 A few of you may know that I'm a huge fan of Philip MacDonald's books (when I can find them) featuring super suave sleuth Anthony Gethryn. But that doesn't mean I don't also enjoy the author's stand alone thrillers as well. Though in truth MYSTERY OF THE DEAD POLICE makes me wonder where Gethryn was during this particular grave crisis in which a madman caused such an uproar that he almost succeeded in bringing down the British government. Well, maybe Gethryn was busy elsewhere.

At any rate, here MacDonald has created another smooth sleuthing fellow, this time named Nicholas Revel. He is an elegant, attractive, clever man with a mysterious past and present (no visible means of support) but cut from a similar cloth as Gethryn in his brilliance, cunning and charm. Though what Revel puts those talents to on a regular basis is something the practitioners of law and order would frown upon if only they knew. Nevertheless it's up to Revel this time out, to help save the government and halt the brutal killings of police which have the police themselves, baffled.

We learn early on that the police are being targeted by a mysterious killer who gleefully keeps a diary of his nefarious actions and shares them with the reader. So we know going in who the killer is if not WHO the killer is - if you know what I mean. We switch back and forth between so-called 'X's' enthusiastic bragging and the helplessness of Scotland Yard and others (the Prime Minister is kept abreast) who are charged with keeping the peace and putting a stop to this sort of thing.

As the slaughter of random patrolmen continues, civil unrest grows. The public demands action. Who is there to stop the murdering madman who kills without leaving any clue?

Let's back up a bit. The insertion of Nicholas Revel into the plot occurs by happenstance when one afternoon, while having a drink in a restaurant lounge, he notices a beautiful (of course) young woman seemingly laboring under great strain. There is a folded newspaper on the table in front of her, the front page of which has apparently upset her. (The keenly observant Revel is excellent at picking up these sorts of clues.)

He overhears her last name and is immediately intrigued. For the damsel in apparent distress happens to be Jane Frensham, the daughter of Sir Hector Frensham head of  Scotland Yard. Revel decides then and there that it would be a good thing to get to know Miss Frenshaw. And this he does, by smoothly worming his way into her confidence and fabricating an alibi for Jane's ex-fiancee Sir Christopher Llewellyn De'Ath Vayle who had been arrested the night before for the death by strangulation of a police officer. (This is the story, the headlines of which, had caused Miss Frenshaw such distress.)

Vayle had been drunk and carousing with his friends but all he is guilty of is stealing a cop's helmet to use as a drinking vessel. (He was very drunk.) Still, the police are sure he is responsible for the dead policeman - case closed. But it is not to be when Revel steps in and supplies a handy alibi (corroborated by a taxi driver) for the incarcerated young baron.

Once Vayle is released, Jane is necessarily under a bit of an obligation to the attractive stranger whose timely alibi has saved the day. We assume (as she does) that he will sooner or later pop up in her life once again. My only fault finding with Revel is that he is not especially likable, but that's probably a minor thing is such an active murderous plot. In truth the most likable character turns out to be Sir Hector Frenshaw, the beleaguered head of Scotland Yard on whose shoulders rest the troubles of a great city besieged by a killer. He, at least, is willing to think outside the box and turn to an unlikely source for help.

Meanwhile as the killings continue, questions are raised in the House and insults hurled. The city of London is on edge and the press is fanning the flames of unrest. The constabulary and other officials wrack their brains to come up with a plan - any plan, that might put a stop to the carnage.

"Very well," said the Prime Minister. "The...steps which I was going to put forward for consideration were - and this is your province, Knollys - that we should call upon the military arm to assist the civil arm. You are as well aware as I of the fact that Frensham would like to double his duty posts - and has, in fact, done so in a few places - but that he cannot do this generally for lack of men. What would be simpler really than to double or even treble his man power by the use of the military?"

"It's a damned sight more than a point of view! It's the truth! You can't say to London: 'Look here, you've been bamboozled for years into thinking policemen can look after you. I'm sorry but they're so far from being able to do that that they can't even take care of themselves, so I think we'll have to spend a bit more money and the army to help 'em!' It won't do, Campbell!"

In one amusing chapter titled, 'Kaldidoscope,' we flit through relevant and irrelevant incident after incident which include newspaper clips and quick conversations captured on the fly. These are mixed in with a dry snipe or two at the English temperament and even an unexpected comment on the author's pseudonym, and the unfortunate death of a citizen by an over-eager cop - all jumbled together in the most entertaining fashion.

This is not, despite the plot being littered with bodies, a long narrative, it's quick, it's entertaining if a bit graphic in parts, and it's fast-moving - in fact, in paperback it's only 192 pages. The perfect evening pastime for a reader who likes this type of thing, especially after a long day of whatever you're up to at this time of year.

I do so wish that Philip MacDonald's books were more readily available. He really should be as well known as any of the other big names in vintage thriller writing - and not just for THE LIST OF ADRIAN MESSENGER.  The books show a bit of their age but otherwise they are, in my view, just about perfection - mainly because they do not require heavy duty thinking on the part of the reader while at the same time supplying just the right amount of puzzle, action and relaxation. And additionally, these sorts of books supply exactly the right ambience. For those of us who love slightly old fashioned tales set in the Britain of once upon a time, ambience is key to our reading happiness.

It's Friday and this week Todd Mason is hosting the Forgotten Book meme in place of author Patricia Abbott. So don't forget to check in at his blog, Sweet Freedom, to see what other forgotten or overlooked books other bloggers will be talking about today. 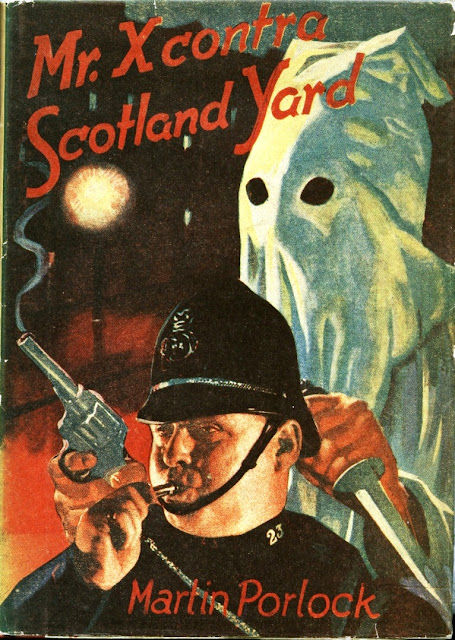 Martin Porlock was a Philip MacDonald pseudonym so I'm assuming he used it on the earlier editions of MYSTERY OF THE DEAD POLICE. This over-the-top cover seems to be the Spanish edition. Love it.