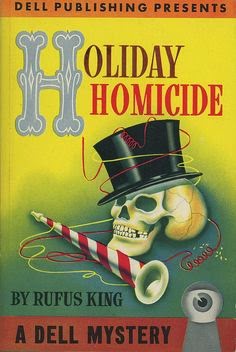 Actually this is a pastiche seemingly based on our favorite Manhattan-centric detectives, Nero Wolfe and Archie Goodwin. The one and only such endeavor of this sort ever read by yours truly.

In Rufus King's New Year's Day murder mystery (I was going to wait until the end of the year to review it, but then gave in to wild impulse) we're introduced to a decidedly eccentric detective named Cotton Moon who is in possession of brilliance, a huge ego and a cohort/assistant named Bert Stanley - an ex-bartender who takes dictation and narrates this slightly improbable tale:

'A nut, if you care to believe it, was the first reason for Cotton Moon getting mixed up on New Year's morning with the homicide in which Myron Jettwick, that prize real-estate operator and heel, starred as the corpse.

The second reason was money; the pay-off being old Miss Emma Jettwick's check for thirty thousand dollars. Moon banked it after her brother's murderer was well on his way toward what an Englishman, who came in on the homestretch of the case down in Tortugas, called "the heated chair."

Cotton Moon's fees have always come high. They've got to, if he's to stay in that state in which he has decided to keep himself. Also if he wants to go plowing about the seven seas on his boat Coquilla in search of rare nuts to add to his collection, and sometimes to eat. You cannot push one hundred and fifty feet of expensive steel and a crew of eighteen men about in the water on charity...

The nut which started off the business on New Year's morning was not a peanut or a chestnut which, according to Moon, are like having grits for breakfast instead of one of Walter's omelets. Walter is Coquilla's cook and was absorbed by Moon, among other things, in Madagascar.  The nut was a sapucaia nut, and it hit Moon on the forehead as we were standing on Coquilla's aft-deck and greeting the first morning of the year through a seven o'clock murk and snow which were tenting New York City's East River.'

So there you have it: first person narration by a smarty-pants (though Bert is no Archie Goodwin) second in command, huge fees, eccentric nut collecting (instead of orchids), a boat (substitute the brownstone and you have the idea) on which the high fees are spent AND, last but not least, a private cook, this time named Walter (instead of Fritz).

So what are we to make of all this?

If you're familiar with the Nero Wolfe stories you may enjoy making the comparison - I did. If you're not familiar with the Wolfe books then you'll just read this as a fun mystery with screwy overtones. I mean, who collects rare nuts? (Please, no emails if you are a rare nut collector and I have inadvertently maligned you. All in good fun, I assure you. Some of my best friends are nuts.)

Still, this is a lively, amusing tale which begins when Bruce Jettwick, a young radio crooner, attracts famed detective Cotton Moon's interest by bouncing a nut off Moon's head on New Year's Day - their two boats are docked side by side in New York harbor. See diagram below: 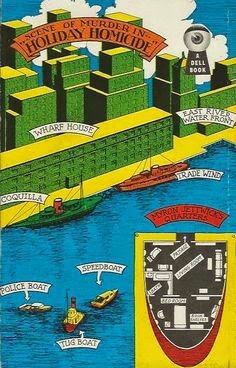 While the city celebrates the beginning of a new year, murder most foul has taken place on Trade Winds, the boat belonging to Bruce's step-father, Myron Jettwick, whose body Bruce has just discovered. Fearing he'll be suspected of the murder, Bruce turns to Moon for help and Bruce's aunt Emma steps in with the check covering Moon's hefty thirty thousand dollar fee.

An improbable tale, not laugh out loud funny but engaging enough and not a bad way to spend a couple of hours.

I've become a big fan of Rufus King having read and reviewed his work before. I'm hoping, little by little, to get my hands on more of his books, if I can find them at reasonable prices. My library is hopeless when it comes to these fine old vintage reads.

By the way, mystery maven TracyK also reviewed HOLIDAY HOMICIDE at her Bitter Tea and Mystery blog - the link. Although she posted her review at the more appropriate time.