This is the oddest fairy tale film, the type of romantic blah-blah (and not in a bad way) they just don't make anymore. (Well, you can tell that from the title.) In certain ways it's a disturbing sort of story, but it soon catches you up and spins you along in a kind of whirlwind similar to that which overtakes the heroine in the film.

I'VE ALWAYS LOVED YOU pretends to take place in the 'real' world of eccentric musical genius, but is instead a soap opera that actually takes place in a kind of never-never land. The minute you see the still gorgeous Technicolor (production design by Ernst Fegte with Franz Cugat as associate color director) you'll know right away that you're not in Kansas anymore. So to speak. 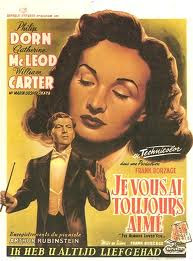 Academy Award winning director Frank Borzage is at the helm and the screenplay was written by Borden Chase (who later wrote the classic, RED RIVER).  The stars are Philip Dorn, Catherine McLeod and Bill Clark.  Not exactly actors with household names it's true, but the film is out of Republic Studios. Remember them? This is one of the rare color films from that very budget conscious studio more used to churning out black and white detective noir, serials or cowboy shoot 'em ups.

The story is secondary to the spectacular classical music played throughout (dubbed by virtuoso Arthur Rubinstein) which is meant to convey the highs and lows of the characters emotions in a rather direct way.

Philip Dorn plays Maestro Leopold Goronoff, an emotional, egocentric genius, world famous pianist and conductor whose peripatetic life is seemingly governed by whim. Early on he is introduced to the daughter of an old friend, a former concert pianist who gave up the touring life to settle on a gorgeous farm in Pennsylvania and raise a family, something Goronoff decries. Of course the daughter is not only a spectacular pianist she is also beautiful and in love with a local farm boy named George (Bill Carter) who says she's the 'best piano player I ever heard'.

Myra Hassman, the daughter, is played by Catherine McLeod. Her father Frederic Hassman is played by the wonderful Felix Bressart though it's hard to imagine him as a former concert pianist. Father and daughter seem to lead an idyllic life down on the farm until the great maestro drops by. (He'd heard Myra play at an impromptu audition in New York)  Goronoff has decided that Myra will be his protegee. (He climbs in through a window - he's eccentric, you see.) And what Goronoff wants Goronoff gets. That sort of thing.

After hanging around the farm for awhile teaching Myra the ropes of being a musical whiz, he insists she will travel around the world with him while he continues to hone her musical brilliance. Myra says, 'okay'. Myra's father has a talk with the Maestro (as well he should) then allows his daughter to head out into the world - all for the sake of music.

And boy do we get music, glorious music, heaps and heaps of Rachmaninoff, Beethoven, Mozart, you name it. All beautifully and powerfully played by the great Arthur Rubinstein. All used by the two main characters in the film to express the Sturm und Drang of being finely tuned musical geniuses seething with emotions. 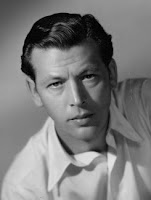 As for the actors themselves, I have to say that Philip Dorn is a total hambone. He plays the womanizing Maestro to the hilt. Leopold Goronoff to the 'nth' degree. He means to outshine any and every musician/maestro ever seen on the silver screen. And he has the heavy accented speech (he is either Czech or Hungarian) which makes most everything he says sound as if he's starring in a 19th century operetta (minus the singing).

Dorn is all artificial mannerisms and physical implausibilities (his conducting movements are laughable) meant to show that except for his complete devotion to music he is the free-est of spirits. He has a gusto for life and the ladies which doesn't slacken even with young Myra in the household as his protegee. In fact his absolute determination to enjoy life gets wearying after awhile - if I were Myra I'd be exhausted  just watching from the sidelines. But having said all that, I still liked him. It is almost impossible not to. At least in the first half of the film.

Goronoff's grandmother (Babushka) is played delightfully by my favorite old lady with an accent: Maria Ouspenskaya. She is a tiny little thing who is charmingly, adorably homely and steals every scene she's in. Strangely, she decides to nickname Myra the prodigy, 'Butterball'. Yes, makes no sense, but that's what Madame Goronoff calls Myra from the moment she meets her. No, Myra is not fat, nor does she resemble a turkey.

In the beginning, Catherine McLeod seems a bit too old to be playing the part of the devoted young girl who quickly falls under the spell of the great Maestro to the point that when her father passes away back in Pennsylvania, she does not even attend his funeral. (Very, very odd that. To think that his old friend Goronoff AND his only daughter don't immediately head back upon learning the news. Even funnier,  Myra doesn't even tell Goronoff of her father's death though he walks in on her just moments after she's read the news in a letter from George, the faithful boy she left behind on the farm. This seems to be a script oversight bordering on the bizarre considering the supposed closeness of Myra and her father.)

Instead they (with grandmother in tow) had to New York City and Carnegie Hall. (NYC is only a few hours away from Pennsylvania. I make no further comment on this peculiar incongruity.)

Music in this film is used to enlarge the emotions of Goronoff and Myra (not that his need any more enlarging). They each speak and emote with each other through their music, almost on a telepathic level. Goronoff has a pet theory, he insists that all music is male oriented, meant to showcase male emotions. (?!) There are no women in music. He means the music itself not the playing of it, since obviously Myra is a woman. She, naturally enough, is taken aback by this, but seems to accommodate the notion well enough.

Goronoff continues throughout most of the film to treat Myra as if she were a devoted school girl whose sensibilities border on the gauche. He purposely refuses to acknowledge her femaleness - for lack of a better world.  He 'courts' his sophisticated women in full view of Myra and seems to have no idea that this behavior might annoy her. It simply doesn't occur to him (at least then) that Myra is more than the sum of a Rachmaninoff concerto.

Back in New York, Myra gets her first official concert with Goronoff conducting the Rachmaninoff. The concert itself becomes a kind of musical duel played out in full view of the audience which includes George, the boy Myra left behind, sitting up in the balcony.

Emotions are laid bare but afterwards Goronoff explodes and accuses Myra of mimicking his style, of trying to show him up, of attempting to be greater than The Maestro. How dare she?! He tells her to go back home and out of his life. 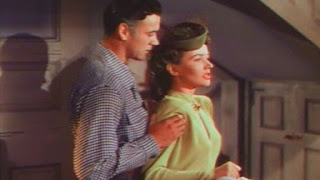 She does just that and shortly thereafter marries George, yes, yes, the boy she originally left behind. Though she warns him that she might not love him in the same way he loves her. Years go by quick as a wink soon enough, Myra and George have a daughter who, in turn, has musical talent. No big surprise there.

Finally Myra (who has not seen or heard from Goronoff or made any attempt to continue her own playing) feels she must face The Maestro once more. This time for the sake of her daughter and her marriage. She wants the Maestro to put the seal of approval on her daughter's talent. She also wants to prove to George and to herself that the Maestro no longer means anything to her.

Bill Clark as George, the long suffering but eternally patient and understanding husband is kind of a blah personality - I suppose he is meant to appear in stark contrast to the bombastic Goronoff.. Clark is necessarily in many scenes in the second half of the film and it just goes to showcase that in spite of his friendly farm boy demeanor, he is not a very good actor.

I won't say how it all ends but I will say that the first half of the movie is significantly more interesting than the simplistic second in which we are brought down to earth with the thud of banal reality. But we get to hear the Rachmaninoff again and as I like to say, too much Rachmaninoff is never enough. The ending feels flat and rather forced after all the angst that has gone before, but I suppose it had to be.

Despite ALL THAT, I still recommend the film. I'm quirky that way.

I'VE ALWAYS LOVED YOU did call to mind another film with a young woman under the spell of an overbearing musical Svengali - it starred James Mason. But I've forgotten the title though I've tried for years to find it.

Don't forget to check in later at Todd Mason's blog, Sweet Freedom to see what other overlooked or forgotten films other bloggers are talking about today. You just never know what you might find over there.