This Day in History: Mutiny on the Bounty 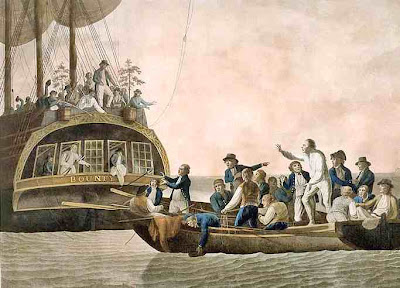 Today in 1789, Fletcher Christian and his merry mutineers on board the H.M.S Bounty cast Captain Bligh and 18 of his crew adrift in a couple of lifeboats. The story will be told in 1932 by Charles Nordhoff and James Norman Hall in a trilogy whose first book is MUTINY ON THE BOUNTY. Link to read an overview of the Voyage and the Mutiny. My favorite Captain Bligh: Charles Laughton. No one in the world can say, "You traitorous dog," with quite the same snarling vituperation as Laughton. My favorite Fletcher Christian: oh, Clark Gable, hands down. As much as I adore Marlon Brando (at least in his early roles) he was not then nor would he ever be an 18th century man.
Posted by Yvette at 4:45 PM

Email ThisBlogThis!Share to TwitterShare to FacebookShare to Pinterest
Labels: History, Movies, Mutiny on the Bounty