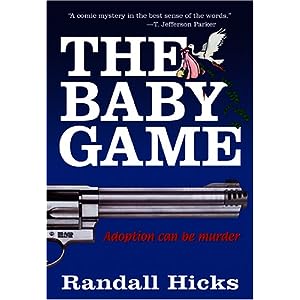 This is my entry in Friday's Forgotten Books meme hosted weekly by Patti Abbott at PATTINASE. Check out Patti's blog to see what other 'forgotten' books are being talked about. Link.

Randall Hicks is a California adoption attorney as well as a writer. (What is it with lawyers that they all seem to make such terrific fiction writers? One of the great mysteries of life.) THE BABY GAME was Hicks' first attempt at mystery fiction and it's a doozy. I love it when a debut is minus the usual clunky writing that some first time authors can't seem to shake until their second or third books - if then. THE BABY GAME has charm and humor, but the sunny California lifestyle of its hero and his friends is overtaken by the shadow of unrequited love, loss, murder and betrayal, plus an ending you will not see coming.

Toby Dillon is a young attorney and tennis ace and one of the most disarming heroes you will ever meet. He is someone I instantly liked and began rooting for from the very beginning. Toby is not your average young lawyer on the fast track to legal fame and fortune, instead he handles whatever adoption cases come his way in between tennis at the local country club. The club is where Toby, very conveniently, has his 'office' - a former storage room in the Pro Shop - which Toby is allowed to use in return for giving tennis lessons to club members. I'll bet Toby is the first and only lawyer/assistant tennis pro in fiction. (Only in California, I'm thinking.) But it's the way that Toby goes about describing what he does and why he does and his matter-of-fact approach to his slightly unorthodox lifesyle that are some of the main reasons this book works so well.

When Toby's childhood friends Brogan and Rita, now one of Hollywood's most glamorous movie-star couples decide to adopt a baby, Toby is naturally called upon to help. For a time being, he is drawn into the fantasy life of his friends who, no matter that they are highly publicised celebrities have remained as down to earth as it is possible to be under such circumstances. Randall Hicks draws and defines Brogan and Rita's lives in a very real and believable way. It's easy to understand and accept how this famous couple and the low-key Toby have remained good friends.

All is sunshine and light until the baby is kidnapped. When no ransom demands are made, the police are stymied and Toby, Brogan and Rita are, more or less, left to try and discover the truth for themselves as the public and the press become impatient for the next event in the lives of the rich and famous. At first the baby's birth mother comes under suspicion, but when people start turning up dead, what began as kidnapping becomes an even darker and more murkily motivated crime.

I can practically guarantee you will like THE BABY GAME even if the unexpected ending leaves you thunder struck. This is a terrific book that definitely deserves a much wider audience. Randy Hicks is a helluva writer with an unique hero and a unique perspective. He has also written a sequel, BABY CRIMES, almost as good as his first book, with another shock of an ending. I hope there will be a third book in the series coming up at some point.