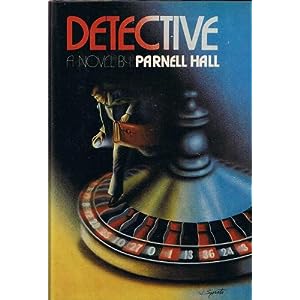 My entry this week in Patti Abbott's Forgotten Books Meme is DETECTIVE (1987) by Parnell Hall, the first of Hall's Stanley Hastings mysteries.

Stanley Hastings is the quintessentially cautious, easy to frighten, most emphatically NOT heat packing private eye working the streets of NYC grumbling all the while because what he really wants is to be is an actor. Realistically speaking, that dream is fast-fading. Stanley thinks he's pretty much useless as a detective and makes no bones about it but a man has to do some sort of work. He still considers himself an actor first, detective second. If there's any kind of audition on the horizon (unlikely as that may be), Stanley will figure out a way to fit it into his day of chasing around Manhattan.

Stanley is, admittedly, an ambulance chaser. He works insurance claims for yet another ambulance chaser: Richard Rosenberg, Attorney at Law and well on his way to millionaire-dom. Stanley gets ten bucks an hour.

"...Look, you know all the lawyers that advertise on TV for accident cases? Well, I work for one of them. He handles insurance claims. People fall down and break their legs, they see his ad on TV, they call him up. He calls me."

I'm usually laughing out loud when I'm reading a Stanley book, and a lot of the scenes I'm usually laughing out loud in, concern Richard Rosenberg. He is so awful in his focused greed,  he is a total shark. He is also hilarious. Despite his personality failures, he is also a brilliant lawyer with a complete grasp of the law as it applies to accident victims and also as it applies to swooping in when Stanley gets picked up by the cops. Richard loves to give the cops a hard time. His usual first question to Stanley is: "Did they lay a hand on you?" You gotta' love him.

There are a couple of ways in which Stanley distinguishes himself from other run-of-the-mill tough guy genre detectives. One, he's happily married to a woman named Alice, two, he has a cute little five year old son named Tommie. They all live in a two bedroom apartment on the Upper West Side of Manhattan. Rent: 750 a month. I know. WHAT?!! But remember this was back in 1987.

Anyway, there are now 17 books in the Stanley oeuvre. While I haven't read the very latest yet, I have read the rest over the years and mostly enjoyed them all, usually, as I said, laughing out loud.

The thing with Stanley is that he's most emphatically not what he thinks he is. He's a damn fine detective and while no Elvis Cole or Sam Spade or Phillip Marlowe, he is certainly NOT a coward. It is this personality quirk that so endears him to me. He honestly does not realize what a terrific guy he  is. A guy who, fumbling and stumbling, always manages to do the right thing. A hero in spite of himself. No wonder his wife Alice loves him.

"The problem with my wife, and it is a problem, is that she really likes me. At least that's the impression that she gives, and I have no way to prove it false. And more than just liking me, she respects me. She thinks I'm intelligent, and capable, and worthy, and she wants the best for me. In short she drives me nuts."

Not to worry, Stanley loves her back.

These books are most emphatically set in a gritty, often sweaty and swarthy NYC and its five boroughs (boros). Soon as Richard the lawyer hears of someone tripping on a sidewalk Stanley is off and running. The subway is his best friend. And I love how he plots his trips across the city, figuring out how long it will take him to hop over to the Bronx then back down to Brooklyn or wherever. He is a logistics expert, he has to be. Any New Yorker really has to be. Author Parnell Hall obviously knows the city well and it shows.

As I said, DETECTIVE was the first in this long-running series (all with one word titles). In it we're introduced to Stanley's world and are welcome to come along by the very engaging use of first person point of view. (I love first person point of view.) The immediate problem for Stanley this time out is that a guy shows up in his office one day and wants to hire him to do 'real' detective work. Somehow the sign on Stanley's door stating Stanley Hastings, Private Detective, has lured him in.

When I read DETECTIVE several years ago, I was grabbed immediately by the opening sequence. This is, to my mind, are some of best opening lines in the history of mysteries. I mean, I was hooked from the getgo. Laughing all the while.

"I want to kill someone."

"No, I mean it. I really want to kill someone."

"Everyone wants to kill someone. It's no big deal. I, myself, have a long list, usually headed by my wife."

For the first time, I gave him my full attention. I looked him over and tried to recall his name. I'm terrible with names.

I'm grinning while I'm writing this. Even after having quoted it so many times.

So here's what happens next. After Stanley explains that he can't take the case because he's not a 'real' detective, his would-be client goes out and gets himself killed. So, Stanley feels duty-bound to investigate much to every one's surprise, including the cops and Richard Rosenberg. They do not take it kindly.

If you want a good laugh, read this book. If you don't like to laugh while reading, then don't. But I have to ask you - why ever not?

To see a full listing of author Parnell Hall's prolific output, please link to to his fantastic fiction page here.

If you can't find a hard copy of the book, looks like an E version (iphone, ipad or ipod touch) is available for $2.99. Better than nothing.