Forgotten Book Friday: HE DONE HER WRONG (1983) by Stuart Kaminsky 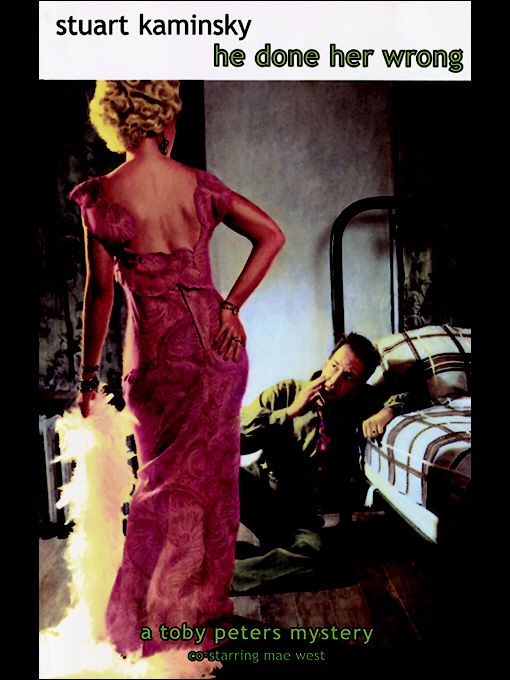 Friday is Forgotten Book Day and here's my offering. Today the posts are being collected by Todd Mason at his blog, SWEET FREEDOM. Next week, we return to Patti Abbott's blog, PATTNASE for the usual listing of Friday's Forgotten or Overlooked Books. Here's the link to Todd's Blog.

Something you might know about me if you're a regular reader of this blog is that I'm a major fan of the late Stuart Kaminsky's books. Most especially his very entertaining series featuring 1940's L.A. detective, Toby Peters - aka Tobias Pevsner. (I've talked about one of his other books before on Friday's Forgotten Books: THE DEVIL MET A LADY in which Toby gets mixed up with Bette Davis.) Kaminsky captured that long-ago era; Los Angeles and its environs during WWII - the home front, and made it his own.

Over time, Toby interacted and solved cases for some of the biggest movie stars and personalities in the biz. Though he remained nothing but a down on his luck, sartorially challenged, good-for-not-much private eye with a yen for his ex-wife, he still, somehow, was the one called upon when a move star needed a p.i. do some undercover work. (I almost said 'when a movie star needed a dick...' But that wouldn't have been nice and in keeping with the wholesome flavor of this blog.)

People a lot sharper than the Aardvark had tried to read my kisser and got nowhere. Mine is a dark face with a flat nose topped with a full head of dark hair generously sprinkled with gray. I stand about five nine and do my best to give the impression that I can take on tigers. It's part of the job. The truth is that my nose has been smashed three times in losing causes. Once by my brother Phil's fist, once by a flight through the windshield of a 1931 Oldsmobile, and once by a baseball thrown by my brother. I sweat too easily, dress too shabbily, and usually can't resist the urge to open my mouth when I should keep it shut.

I smiled at an old lady in a little black hat who had looked my way. My smile scared her...

HE DONE HER WRONG is the eighth book in the Toby Peters series (beginning with MURDER ON THE YELLOW BRICK ROAD in which, you guessed it, Judy Garland gets involved when a murder - the death of a munchkin - occurs on the set of 'you know what' film). This time though, it's Mae West's turn to seek Toby's help when her memoirs are stolen.

...out stepped Mae West, but it took me a blink to recognize her. Her voice was the surest touchstone. The woman before me wearing a frilly purple dress had neck-length brown hair, not blond, and was barely on the good side of plump. She gave off a heavy perfume that smelled like a flower I couldn't place and looked at me with amused violet eyes and her hand on her hips.

"Welcome to Paradise," she said, stepping back. "It's a little gaudy and overstocked, but we call it home."

The usual suspects are on board to help or hinder Toby's quest for West's sizzling autobiography which someone is afraid may contain some unpalatable truths. Toby is right at home trading bon mots with West and later dealing with a crazed West fan, a roomful of Sherlock Holmes aficionados, Cecil B. DeMille, the inmates of a loony bin...uh, sanatorium from whose clutches Toby must make a daring escape, assorted family secrets and murder most egregious.

Along for the ride are Toby's best friend the Swiss midget and translator, Gunther Werthman, the wrestler and poet, Jeremy Butler and the unhealthy, cigar chomping dentist from hell, Shelly Minck - not to mention Toby's ancient landlady Mrs. Plaut who can never seem to get Toby's name right and thinks Toby is a combo book editor and bug exterminator. Throw them all into the mix and you get another hilarious Toby fun noir detective yarn which culminates at a banquet thrown by Cecil B. DeMille with a  guest list including, Chester Morris, Madeleine Carroll, C. Aubrey Smith and D.W. Griffith, among others. As Toby says, "It was going to be some party."

For a complete list of titles in the Toby Peters series and all the rest of Stuart Kaminsky's books, please use this link to Kaminksy's Fantastic Fiction page.