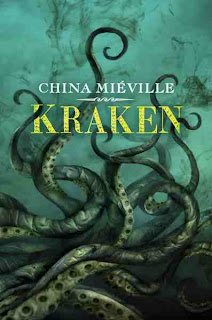 This is going to be a strange book review. Well, stranger than usual anyway. I must admit I read this book, enjoying it as I went along primarily because I so like China Mieville's style and chutzpah. There are things in this book that are just mind-wrenchingly good. Things that astound: one character named Wati who enchants in the way you're not normally used to being enchanted - AND he doesn't even have a corporeal self. He's an entity - leftover from ancient Egypt, a little spirit who jumps from statue to statuette to Captain Kirk action figure to... well, long as it's a figure with a head, Wati can make himself at home. For Wati alone, it's worth reading the book.

The main disappointment for me in this 509 page saga of a lost London on the edge of the end of the world, is that what I thought from the beginning would happen - didn't. Whose fault is that?
Probably mine. But China's got to take some of the blame too, I'm thinking. He set something up and then didn't deliver. Though it is entirely possible that I mis-understood what he was setting up. In all likelihood, that's really what happened.
Listen, it wouldn't be hard to misunderstand what's going on in this book. The thing with China, I think, is the same thing I find with Michael Innes: he fully expects his reader to be as smart as he is. Hey, that's not always the case here, China. There's stuff in this book that had me thinking: huh??!! I mean, HUH?! Days later and I'm still trying to find the word play in the character names: Goss and Subby. I mean, there HAS to be a hidden meaning there I'm just not getting. IT'S AN ANAGRAM OF SOMETHING DEEP, RIGHT?? Please, end my misery, tell me what I'm missing!
And by the way, two more disgustingly vile and villainous characters than Goss and Subby you will not find in the entire history of literature. They are the embodiment of everything foul, vicious and deadly. I tremble to think that even my beloved Joe Pike might have a problem with Goss and Subby....Nah! But you can take your Mafia, your Russian hoodlums, your gang-bangers, your Nazis, your, well you name it, I'd put Goss and Subby up against them any old time.
Okay, here's what we have: We have a giant squid, Architeuthis dux, the KRAKEN in the title - remember in Jason and the Argonauts: Let loose the Kraken!!! - well anyway, this Kraken is a dead, preserved specimen, stolen (along with his giant tank) from the Darwin Center at the Natural History Museum in London. His 'keeper', guide and curator at the museum is Billy Harrow whom one assumes to be the hero of this tale. However, my feeling is that Dane, another character we meet along the way is the real hero, but I could be wrong.
There are SO many things about this book that I could be wrong about, so don't take anything I say as gospel (ha!) unless I absolutely say so.
Well, turns out this Kraken, dead and lonely and unlovely, floating in his tank of preservatives, eyeless, sightless and dead these many years since he was hauled from his home deep in the sea - the sea, now see, the sea is another character in the book, the sea which takes up residence in a little London house and waits for developments. Where was I? The Kraken - the giant squid is viewed by some cliques in London as a God. Yes, he is worshipped. The Kraken and his often frenzied religous worshippers are but one faction of this tale of the end of the world as it applies to London.
In this world China Mieville has created, there doesn't seem to be 'anyplace else'. London is a destination unto itself. Many worlds unto itself. All living together, ignorant or ignorning of the other. If you read China's previous book, the brilliant THE CITY AND THE CITY (a must-read), you'll know that he's very adept at this city within a city thing.
There are different factions in KRAKEN which might or might not have had a hand in stealing the squid from his 'resting' place at the museum. The cops, having their own cop-axes to grind, of course are involved in wanting to get him back - the Kraken is stolen property after all: that's one faction. Then there are the Londonmancers, the spell-makers, the space shifters, the religious sects, the bad-ass gangs, one of them led by a guy who is no more or less than a talking tattoo etched on the back of an unfortunate guy named Paul. The tattoo is named, well, Tattoo. To hear his orders and his rants, two gangbangers make sure the reluctant Paul is always facing the right way. This is one of the most inventive sequences in the whole book. The realization of it and and how it works is, as I said, in the beginning: mind-wrenching.
Turns out the Kraken has something to do with the coming end of the world and one faction is trying to save him while others are trying to use him or destroy him. That much I understood.
There's a dazzling on-going sequence pertaining to one character (not the Kraken) who is supposed to be dead and when he comes back (not the Kraken), he is incorporated as ink on writing paper. This amazingly inventive, brilliant and illustrative sequence of events is one of the reasons I say, read this book!
Go ahead, read it. You might make more sense out of it than I did, then you can explain it all to me. Sometimes the trip is better than the destination. Cool-Hand China, the guy who thought it all up. KRAKEN.
Posted by Yvette at 1:05 PM