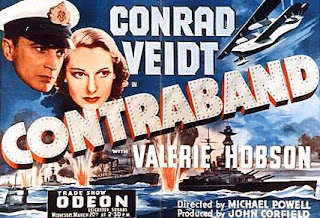 This is Tuesday and you know what that means: Overlooked (or Forgotten) Films and/or other Audio/Visuals, the weekly meme hosted by Todd Mason at Sweet Freedom. So don't forget to check in and see what other intriguing entries other bloggers are talking about today. I've got a great one - if I do say so myself. 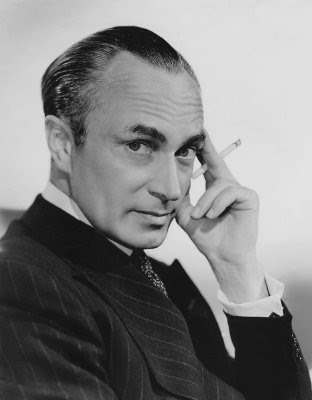 Who doesn't love Conrad Veidt? Wherever the spirit of this dear man is today (he died young and very untimely), I hope somehow he knows how much he is still loved and appreciated by movie mavens all over the world.

CONTRABAND (1940) is a delightful wartime spies and Nazi bad guys film directed and written by the great team of Michael Powell and Emeric Pressberger. I first read about it at Sergio's wonderful movie blog, Tipping My Fedora - so thanks go out to him for the intro. I would have been sorry to miss the duo of Conrad Veidt and Valerie Hobson in their second film together. (Check out Sergio's Top 20 Spy Movies.)

CONTRABAND is the last movie Veidt made in England before moving on to Hollywood (he had escaped Germany with his Jewish wife in the nick of time). Veidt - who usually played a villain - plays the hero here and what a hero: a dashing Danish sea captain navigating his merchant ship in the dangerous waters of the Atlantic during wartime. In 1940 Denmark is a neutral country allowed clear sailing by the British after first, of course, being boarded and inspected by one of their contraband control ships. 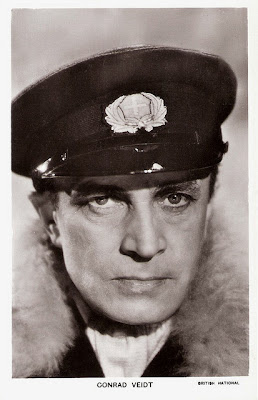 Captain Hans Andersen (yes, that's his name) is headed for Rotterdam and isn't happy about being stopped, it means an overnight delay in his schedule. He is further annoyed when two of his passengers, a mysterious Mrs. Sorensen (Valerie Hobson) and a Mr. Pidgeon (Esmond Knight) abscond with two passes (and the small motor-boat) meant for him [Andersen] and his first mate.

But the Captain is nothing if not resourceful, he and his first mate take to the high seas in a stealthy rowboat. The chase is on. 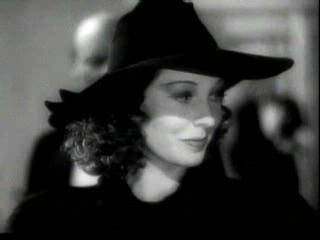 On land, Andersen and the first mate split up and the Captain soon catches up with Mrs. Sorensen who is headed (incongruously enough) to her aunt's house in London. Mr. Pidgeon has some other errand to run and the pair has separated. The Captain vows to stay glued to Mrs. Sorensen's side since she is obviously up to some nefarious something or other. I love Valerie Hobson's insouciant attitude in this, she is obviously vexed but not unwilling to have the dashing Captain at her side. 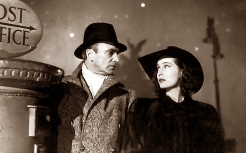 This is a London, by the way, which is under strict black-out conditions - most of the action taking place at night in the murky shadows of a city under siege. The photography by F.A. Young and sets by Alfred Junge are wonderfully, expertly done - lots of moody chiaroscuro effects and intriguing camera angles, lots of imaginative nooks and crannies and a fully working elevator (created by Junge) heavily (and creatively) in use at the Nazi hideout.

Needless to say, the screenplay by Powell and Pressberger is also full of witty conversation and charming shop-talk between  Mrs. Sorensen and the Captain, a couple who are clearly Meant To Be. 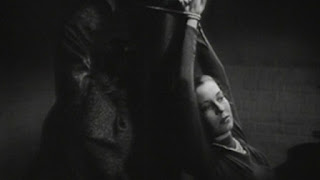 In the course of this fast-paced thriller, our intrepid duo are taken captive by Nazi agents (yes, she is definitely a spy, but for the good guys), whereupon the Captain escapes, leaving her behind to stall for time (with her trust and permission). There begins an exciting London romp with the Captain picking up cohorts (the staff at a Danish restaurant where he and Mrs. Sorensen earlier had dinner) as he navigates the London black-out to try and save Mrs. Sorensen, stop the Nazis, and prevent an American ship from being mistaken for German by the Brits. 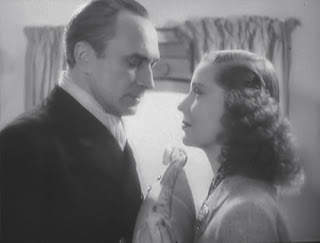 All in a night's work for the clever Captain Andersen.

(In one scene he introduces himself to the bad guys as Hans Andersen and they in turn, introduce themselves as the Brothers Grimm. Witty under pressure. In another scene the Captain hides out on one of the upper floors of Nazi headquarters, a room full of plaster busts of Neville ('Peace in our time.') Chamberlain - at least that's who they looked like to me. I hope that's who they are. Too ironically funny.) 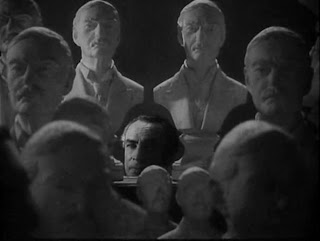 Don't miss this movie, but try to find it in whole form if you can. I will now definitely be buying this to add to my small, but growing, film library at home.

Thanks again, Sergio - this one's a keeper.

To read more about CONTRABAND, behind the scenes info and such, please check out the Turner Classic Movies website here.  Watch the trailer here.

Just found out you can watch CONTRABAND on Amazon rental for $2.99.
Posted by Yvette at 1:59 PM