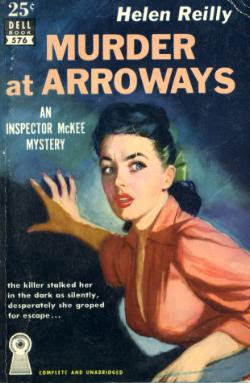 I'm a sucker for books with titles beginning with "MURDER AT...." Especially when there's a house name attached. If I stumble across one, I'll usually give it a try. I did with this title last year but didn't think much of the whole thing. In fact I kind of remember just skimming through it. (This is not the edition I have though - I somehow got my hands on a gray hardcover minus dust jacket.)

But upon rereading (and not skimming) MURDER AT ARROWAYS over the past two days, I've changed my mind. Hence, my review. Surprisingly, this is not a bad little 'had I but known' type mystery (with gothic overtones) of the kind made so popular by Mary Roberts Rinehart. And like in Rinehart, there's a bit of a romance attached to the blood-letting. It is that of the leading lady improbably named Damian (which kind of confused me at first) and the 'leading man' and occasional suspect, Oliver Mont. Okay, when was the last time a hero was named Oliver? Well, yes, there's Oliver Twist. But really...From my view, these types of names are meant to show you that the sorts of people involved in our mystery are of a certain class (usually with money and property) so popular in books of the 1950's. For goodness' sake, there's even a guy named Hiram which, okay, sounds like a farm hand, but in this reference isn't. (Remember all the imposing sounding names used in Perry Mason books and further, in the television series?) Hey, growing up in the 50's, I knew a kid named Preston.

Something else: I understand (from reading Bev Hankin's review ) that MURDER AT ARROWAYS is part of a series by Helen Reilly featuring a detective named McKee, But since I didn't know that and since Inspector McKee hardly features in the story (never really making an impressionable dent), I don't see that it matters - I mean, not having read any of the others.

Damian Carey is a poor but honest young woman living in the city, trying to make ends meet while taking care of an invalid cousin named Jane. We learn early on that there is some mystery to her background since there is money somewhere but Damian's mother was stricken from the family tree for making an infelicitous marriage. You know how that goes. Well, the parents are deceased now so they don't enter into the present day story.

At any rate, upon the death of Maria Mont, Damian's wealthy grandmother, the dominant (and fear inducing) matriarch of the family, Damian learns she has been unexpectedly left the huge family white elephant, Arroways, a Connecticut estate of the kind nobody (well, except for the Monts) lives in anymore. Later in the story we also learn that Damian was bequeathed some valuable jewelry as well. But let's not get ahead of ourselves.

From once upon a time when she was young and impressionable, Damian remembers and is still intrigued by Oliver, the Mont family scion who has broken away from the family fabric business and begun his own airline transport. She knows he is engaged to be married but she hasn't seen him in years so how can that matter now? (Never mind that he's tall and blond and devastatingly handsome.)

With her friend and hopeful suitor, Bill Heyward, in attendance, Damian sets out for Connecticut to see Arroways and try to figure out just how to deal with this unexpected windfall.

Unfortunately, Eleanor Mont (Oliver's mother) and various family members still live at Arroways and must now prepare to vacate the premises and give way to what they obviously consider to be a little upstart. Upon their arrival, Bill leaves Damian on the doorstep and goes off to visit his aunt who lives in the area and with whom he will be staying while he irons out some inventing business he's up to. In the meantime, the reception that Damian receives at Arroways is awkward but cordial - just. The large and gloomy house is heavy with Atmosphere. It doesn't take us (and Damian) long to realize that there is something very wrong at Arroways. Family Secrets!

And it's obviously not just concern about Damian's surprise bequest.

Upon Grandma Maria Mont's death AND the death just a few hours later of her adopted son Randall (Oliver's father) Eleanor Mont and her children inherited the family fortune and business which unfortunately also included Maria Mont's man-eating manager, informer and all around hench-woman, the glamorous Anne Giles who has a taste for jewels and blackmail, and of course, has eyes for Oliver.

When Giles is found murdered, there is no shortage of suspects for the local police and later Inspector McKee to investigate. Of course, it doesn't help that EVERYONE is lying and that Oliver's unsteady sister Jancy has a drinking problem (the first time Damian meets her, Jancy is literally falling down drunk) AND that she obviously hated Anne Giles. (Well, let's face it - who didn't?) Then too, Damian is on the spot when, from her bedroom window, she sees Oliver tucking someone into a car and driving away on the night of the murder. A secret she confusedly keeps back from the police.

And by the way, who is that lurking about the house? What are all those suspicious noises? Why is Eleanor Mont on the verge of collapse? Why does Damian continue to behave so illogically. Yes, she's fond of Oliver, but where is her sense of self-preservation? Won't SOMEONE PLEASE TELL THE COPS WHAT IS GOING ON? Nope. This is one of those infuriating tales where everyone has something to hide and the cops keep banging their heads against the wall.

When a second person is murdered and Oliver and Damian are on the scene, further attempts at obfuscation follow. Is a happy ending forever to elude these two?

Read the book and find out.

But remember that this kind of thing requires a certain sort of mood. It will have you rolling your eyes (yes, the heroine goes down into the dark cellar when fleeing from the murderer in an empty house - a situation, really, which could have easily been avoided) yet somehow, you want to keep reading and you do.

Helen Reilly was not what I'd call a great writer of mysteries (her plots can be dull and rather obvious) but a few are definitely worth looking for. This one for instance, which turned out to be surprisingly enjoyable.