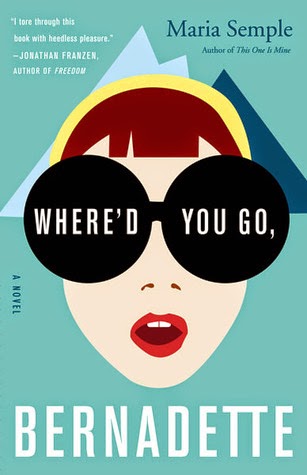 This was a surprise of a book. Didn't like the title, wasn't crazy about the cover. But I read a review somewhere (can't remember where, but if you know, then remind me and I'll add it to the post - hey, old lady memory - it is what it is) which told of the book's delights and I was intrigued. Luckily my library had a copy because I wouldn't have gone out of my way to search the book out otherwise. That's how much a bad cover affects me.

Doesn't it look like young adult fare? Or maybe a book-club book? That's the kind of vibe (are they still using that word?) I like least in a book. Why? Because in my own no doubt prejudiced view, it portends a certain style of writing intended to appeal to women.

But I was wrong.

This is the sort of thing I can see being turned into a fun, sly, intelligent film by fun, sly, intelligent folk. Not that the book would be all that easy to transcribe into screenplay being, as it is, written in bits and pieces: mostly e-mails, text messages, first person narration, blog post, letters and other assorted communications. Not entirely an epistolary novel, but almost. This gimmick adds a certain haphazardness to the story which I liked.

The first person narration is handled by fifteen year old prodigy, Bee, who knows something isn't quite right but idolizes her mother and when Bernadette goes missing and is given up for lost, Bee decides it's up to her to go find her mom.

But first a word or two about Bee's mother: Bernadette Fox is an almost forgotten icon in the annals of architecture. Once much admired and even worshiped, she is still talked about as a kind of 'guru' in certain architectural circles - the only woman in a field dominated by men. Twenty or so years ago, Bernadette was a rebel at the forefront of 'green' building design - she was green before anyone knew what being green was all about. Her Twenty Mile House project in L.A. retains the status of legend though the house no longer exists and the plans destroyed. But since that turbulent time, Bernadette has been unable to create anything despite being the recipient of a prestigious MacArthur Grant.

The family subsequently moves north to Washington state so that Bee's brilliant father Elgin Branch can begin his dynamic rise at Microsoft. (Reading about some of MS's peculiar quirks and foibles had me shaking my head and, yes, laughing.)

The house the Branch family moves into in Seattle (a town which unsettles Bernadette to the point of psychosis) is nothing more or less that a dismal, rain dampened, swampy ex-school for girl delinquents. A large institutional building on a hill which Bernadette vows to transform into a livable family house just as soon as she gets over her mood swings, resentment, self-pity, agoraphobia and other assorted ills, and springs back to what she once was. But years after the move, the Seattle house is still in total disrepair, weeds and angry plants growing through the floors and walls and water seeping through the ceilings so much so that most of the place is unlivable.

Since Bernadette refuses to join in any of the Galer Street School (Bee's select school situated - democratically - next to a salmon packing plant) parent/student activities and sneers (in hilarious email diatribes) at the whole Seattle lifestyle relished by those Seattle bred and born (and don't get her started on Canada), she is disliked and dissed by the other parents whom Bernadette refers to as 'gnats'. Particularly paranoid is Bernadette's next door neighbor, perhaps not without reason.

In the meantime, driven by personal demons, Bernadette has made some very rash decisions - including outsourcing her day to day chores to an agency in India - which leads to all sorts of misunderstandings involving the FBI, the Russian Mob, blackberry plants run amok, a mudslide which takes out a neighbor's house, a psychiatric intervention gone awry, an ill-fated one night stand, and last but not least, the disappearance of Bernadette off a ship cruising the Antarctic.

Full of surprising plot twists and turns, WHERE'D YOU GO BERNADETTE is mostly a story of mother/daughter love, a troubled marriage, a befuddled but likable father at his wits' end, the resiliency of children, the rise and fall and aftermath of legend, the peculiarities of political correctness, the absurdities of life in the Emerald City and the oddities of day to day at Microsoft headquarters. (I do, however, love the idea of candy machines which produce candy without any coins having to be inserted. Well-played, Microsoft.)

If I were giving stars, which I don't, but if I were, I'd give this book 4 and half.