Eric Mabius looks as if he's thinking: Can you guys believe my good fortune?

Forgotten (or Overlooked) Films and/or Other Audio Visuals is the weekly meme hosted by Todd Mason over at his blog, Sweet Freedom. So don't forget to check in (when you get back from voting) and see what other films and etc. other movie mavens are talking about.

No political films for today - did that yesterday. Instead I have a nicely done May/December romance starring the still incredibly beautiful Jacqueline Bisset. (Thank goodness she apparently has not seen fit to alter her appearance with ill-advised plastic surgery.) and Eric Mabius who some of you may remember as the hapless boss in UGLY BETTY. All I can say - if I may be so crass and bold, is: WOOF!

This film is a treat to those of us needing a diversion to keep our minds off the election until the results are in later tonight. (I'll be on pins and needles all day.)

Originally made for television (I know, I know, this is the second made-for-TV film I'll be talking about in less than a month. Have I gone nuts? Nah! Well, maybe.)

English Professor Maggie Webber is dumped by her cad of a husband (Nick Mancuso) after 25 years of marriage. (On the eve of their anniversary, actually. You know how awkward men can be about timing.)

So what would you do? No, put the gun down, he's not worth it. Besides, revenge is a dish best served cold.

At any rate, Maggie does what any intelligent woman might do upon learning that hubby is leaving her for a blond babe named Bridget. She goes back to her roots - no, not the hair dye kind.

In this case it's to an upstate town named Little Bear Lake (the state is not mentioned but it looks like maybe someplace in Illinois - use your imagination) where Maggie grew up and spent some of her happiest days. She also wants to get back in touch with her long lost first love whom she hasn't seen since she left town at the age of eighteen for reasons which are less than made clear, but it's not important - maybe college and something about a sickness in the family. Whatever.

Once back in Little Bear Lake, Maggie comes across the old Harvest Moon dance palace (well, a colorful old mansion by the late actually) all boarded up and neglected. (One wonders why someone in the town hasn't had the sense to fix the place up before this - after all, it's WATERFRONT property!)

The Harvest Moon was where Maggie and her long lost love (whom we see in flashback) used to go to dance, hang out and cuddle, oh so many years ago. So Maggie decides, on the spur of the moment, to buy the place and bring it back to life. One thing she cannot bring back to life though is her long lost love, unfortunately, he's been dead for several years. Uh oh. 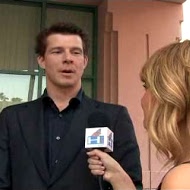 Enter John Keats Fleming (Eric Mabius) the handsome son of Maggie's first swain. Uh oh. Okay, enough of that. John comes equipped with an 'in-place' girlfriend of appropriate age but that doesn't mean anything once he gets a good look at Maggie. I mean, Jacqueline Bisset - come on.

But before you can say, 'oh no they didn't' - Maggie and John do - fall in love, that is. (This is a film with no hot and sweaty sex - only the implication thereof.) Maggie hires John to oversee the renovation project and while he is busy fixing up the Harvest Moon and she is busy squaring the finances and making friends in town, they are drawn to each other, never mind the impropriety. Don't you love it when a story adds impropriety to the mix? John is twenty-something while Maggie is, obviously, quite a bit older. (Not that there's anything really wrong with that.)

Bisset and Harper - a great combo.

Maggie is also lucky enough to meet and makes friends with effervescent and thrice divorced Claire (Valerie Harper who is her usual self-deprecating wonderful self) and the two eventually become partners in the Harvest Moon venture. But in the meantime, Maggie is torn with doubt about her feelings for John. Is she just attempting to relive the past? Is she taking unfair advantage of John? Is she living in a dream world? Is she hot for John's young bod?

Yes to all of the above.

But somehow it all works - due primarily to Jacqueline Bisset's warmth, charm, and photogenic presence, not to mention Eric Malbius' sexy adorableness, and it all blends together nicely to make a sweet and rather improbable love story which I enjoyed and plan on watching again. Sometimes I'm just in a fairy tale mood.


ELECTION DAY TODAY! Go out and VOTE!! No excuses.