Since I may be without power for several days as Hurricane Sandy barrels its way up and into my neck of the woods - New Jersey - I thought I'd post my Forgotten Film Tuesday post today.

Apropos of up and coming conditions, my choice for Tuesday is Samuel Goldwyn's HURRICANE (1937). A film directed by John Ford and Stuart Heisler with a screenplay fine tuned by an uncredited Ben Hecht. Talented people. The special effects are also quite good not only for 1937, but for anytime - they work and catch you up in the thrills and harrowing chills. What more do you want?

Remember too, to check Todd Mason's blog, Sweet Freedom for more Forgotten Films. Hopefully he'll be online as will the majority of movie mavens who normally post on Tuesday.

Okay, so mix all these acting pros together in a tale of racism, murder, persecution (ala Les Miserables) PLUS some really nasty weather and you have one terrific popcorn movie.

How gorgeous are these two?

The story takes place during the good old days of Colonialism (I'm being ironic) in the South Pacific. John Hall plays Terangi, a well-meaning native who works on an island schooner captained by the always acerbic Jerome Cowan (one of my favorite actors).

Terangi's intial run-in with the law after a brief scuffle in a bar in Tahiti initiated by a racist lout, begins years of hardship for an man who, as his sentence keeps getting extended, cannot stand being confined. Terangi tries repeatedly to escape and get home to his wife Marama (Dorothy Lamour), not to mention to the daughter he's never seen.

The story is revealed in flashback by Dr. Kersaint (Thomas Mitchell), who tells the tale to a fellow passenger as their ship passes a ruin of an abandoned island somewhere in the Pacific. Kersaint knew all those involved in the story and so is the perfect person to enlighten us. 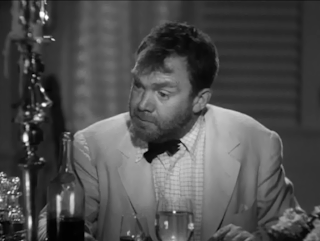 Thomas Mitchell as the doctor. The actor received his first Oscar nomination for the part.

Hanging on for dear life.

Making faces at the wind.

The main memory I have of this movie is the hurricane near the end. It is extremely well done and one of the main reasons for seeking out this film while you're sitting around, hopefully nice and dry and cozy. Unlike me. I even liked Mary Astor as the sympathetic wife of the French Governor of the island, Eugene De Laage (Raymond Massey) Let's face it, no one could play a stiff-necked, rigidly inclined, law and order type like Raymond Massey. (Though it's hard to imagine Massey and Astor in the privacy of their bedroom, but let's not digress.)

I love a good sneer.

The gloriously evil-countenanced John Carradine plays his usual scurvy type who gets his just deserts in the end and C. Aubrey Smith is well cast as a humanist priest, good at keeping secrets. 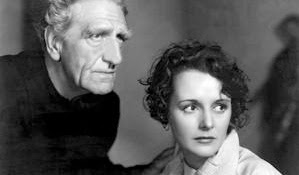 The craggy faced C. Aubrey Smith (another of my faves) and Mary Astor. If you've never seen this film, don't miss it. It is now available for instant viewing on Amazon for a couple of bucks and for instant streaming on Netflix, if you happen to be a member. Trailer. 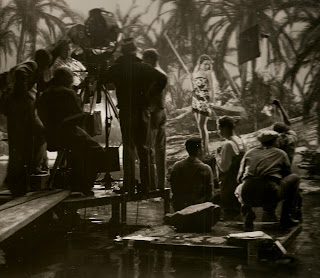 John Ford and crew, shooting a scene on set.